The first Factor Five Five Factor Preview of the year comes to you from Cincinnati, where the Bearcats and their once-arrested mascot host the ailing Pitt Panthers. Pitt lost to Youngstown State last week, a team that does not even get the privilege of BCS money or a bowl game, and instead must slog through a gross playoff for championships. Ew, playoffs! Cincinnati made a better debut by playing no one whatsoever in a bye week, but what feels like an inevitable forty point win for Cincy could be something entirely different! Why? This is the Big East. No one is good at anything, even trends or being consistent.

Nebulous Statistical Comparisons of Dubious Validity. Cincy's data set is null, so let's begin with Pitt's, which after one game is an sketchy outline at best of the team's capabilities, talents, and ultimate potential. With that said, the image Pitt's numbers trace out is a really bad picture of a very poorly drawn cat. Like this one, say: 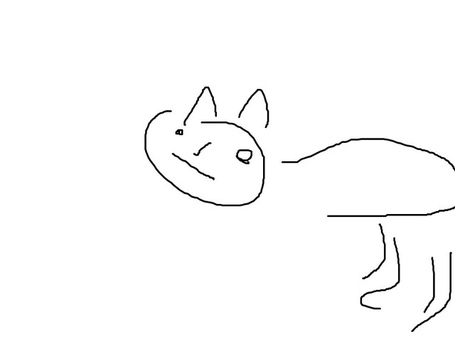 Pitt turned the ball over twice, never held a lead, and allowed over 200 yards rushing to a Youngstown State team whose future opponents include Valparaiso, Northern Iowa, and Western Illinois. That they can play a nearly identical schedule to Florida State's and still not compete for a BCS title, and therein lies the cruelty of our system.

Pitt's quarterback Tino Sunseri has thrown one touchdown in his last 16 quarters of football competition stretching back to last year. In this same calendar year, he threw a total of one touchdown in the fourth quarter for the entire year. We present this fact and a bad cat picture within several inches of screenspace to juxtapose facts and relevant images adding up to "You may want to consider other things at quarterback, because all you have is a poorly drawn cat of a team, and it starts at quarterback even though Tino Sunseri is very tough, and tries real hard."

His counterpart on the Cincy side of the field will be Munchie Legaux, a fantastic name who sometimes struggles with throwing the ball. "Struggles, you say? Like, throwing the ball with crab hands bad?" Not quite, and certainly not like "Tim Tebow throws like a centaur because HOOVES FOR HANDS" kind of way, but still not the most polished passer you could imagine by any stretch of the imagination. On a scale of one to five Reggie Balls--with five being "you are actually Reggie Ball"--he's around a three. That 47% passing completions rate? Somewhat mitigated by legs and playmakerfactorbackedness.

Cincy also has what could be a very good defense, especially at defensive end, and did not lose to Youngstown State last week. Pitt's the more experienced team at this point in the most negative sense of the word.

A blowout in installments includes an outlandish origin, gigantic evil Disney villain eyes, its real life species referent having the name "binturong," and a 2010 arrest for throwing snowballs? Like a real arrest and everything?

Additionally, there is this note from Wikipedia about the binturong.

Females are 20% larger than males

Nipper is deeply underrated, a small but well-wrought football theatre with decent noise for the size and some very game locals. They would despise the comparison, but it really is like an embryonic 'Shoe right down to the shape. The really low walls in the endzone allow for some very cute fan/helmet interaction which surely got Mardy Gilyard, just, like, thousands of blowjobs in the months afterwards (and deservedly so.) If we say "nice little place," that is not condescending in the least, and certainly no faint praise for what is (for the Big East, at least) a reasonably tough place to play.

They also were undefeated there last year, which is nice.

ADVANTAGE: CINCY. We didn't even have to mention Munchie Legaux, because Cincy has the strongest all-name team roster of any team in college football, and there is no close second. LEVITICUS PAYNE.

Eh, maybe Pitt wants to avenge a painful 26-23 loss, and get a fresh start on the year? We're sure they'd like to do both of these things, but life is not about what you want to do, it is about what you can do. And right now it looks like Pitt can just put its head between its legs, brace for impact, and hope to wake up one day, not too badly injured by the experience of 2011, bathing in the sunlight of a beautiful new football world.

For the moment, though, this plane is crashing, mostly because the pilot Todd Graham bailed out before any of the passengers could say a peep about it. Be gentle, Cincy. The Binturong is a tender lover.

SUMMARY: 5-0, ADVANTAGE CINCY. The Factor Five is a blowout this week, just like the game will likely be. There is no record for the year, but if you're winless you're also undefeated, no? We'll take it.