We went to College Station last fall for the final game against Texas and had what is best described as a fun, but ultimately kind of sad and weird time thanks to Texas playing its last scheduled game against the Aggies, and then winning it at the gun in painful, predictably snakebitten fashion. We repeat: Case McCoy, like Steven Seagal, should never run, particularly in front of witnesses. 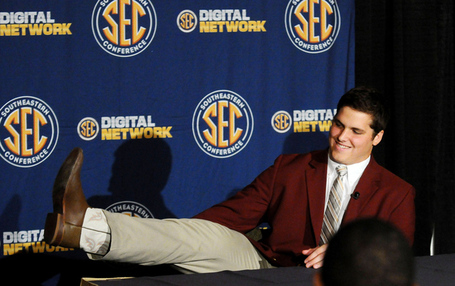 We can't be there this year for the debut thanks to some horrendous scheduling, so here are some free travel tips from EDSBS to those Florida fans experiencing the Hate Barn for the first time.

1. Be Nice. Aggie fans are absurdly nice. College Station is kind of like stepping back into 1982 in many ways, but this is not one of the unpleasant aspects of its 1982ness, even if you have to recalibrate your sincerity/sarcasm meters a bit. "Have a great day, and enjoy the game!" does mean exactly what it seems to mean, so don't answer it with "Fuck off, cracker asshole!" like you would at Alabama. (Or do. They have swords, you don't, so good luck.) For the most part, they mean it.

2. Don't Bring Your Horse! Don't do this, they already have them. Again, be nice: it's only a horse, unless it's President Horse, and then you should be doubly nice. He's had people killed.

3. You will have no idea what is going on. This is not like the first visit to an outside stadium. In a typical visit to a rival stadium, there are three, perhaps four chants, cheers, or gestures unique to the environment. These are pieces of semantic slang you can pick up rather easily without any deciphering or explanation. For example, at Florida there's the chomp, Go Gators!, and "We Are the Boys" and "Jaws." Simple enough.

At Texas A&M, there are no fewer than fifteen hand signals alone: 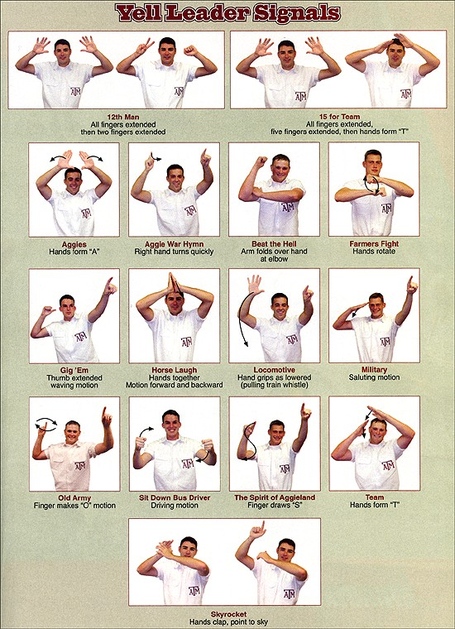 There are...soldiers. And the aforementioned horses, and kissing after scores, and some towels waving, and then everyone leaning back and forth and scaring the shitnails out of the reporters in the pressbox by swaying back and forth and rocking the whole stadium. It is a subculture complex enough to make DragonCon attendees look like amateurs, and that is before we ever get outside the stadium itself.

Let the weird wash over you. As strange as it may be, it makes almost everyone else in the league seem utterly halfassed in terms of coordination, and will make you hesitate before ever calling Alabama or any other fanbase "a cult" ever again. Commitment: Texas A&M has three decks full of it.

4. Watch the band. Everyone else does, sitting stockstill in the stands for the most part. Military band formations! They're kind of boring and mesmerizing all at the same time.

5. SAUSAGE. If the setup is what we remember to be, hit the sausage stands right outside the stadium. They are fantastic if only for the smoke that wraps one side of the stadium in a meaty, spice-scented fog of woodsmoke and staggering fandom. If Ron Swanson had an odor, it would be this with just a hint of reasonably priced scotch beneath it.

6. Look up. Three decks full of people swaying, even in an open-ended stadium, is a jaw-dropping, equilibrium-destroying sight.

7. Stay all night, stay a little longer. Like Clemson, Auburn, Morgantown, and so many other college towns, there are very few roads going in and out, so buddy up, bring enough beer to make yourself an attractive invite, and then bullshit for a while at tailgates because you aren't going anywhere. Red tail lights all the way to Houston will be the norm, and in most other directions, too.