MAN THAT'S NOT EVEN THE RIGHT SIZE. 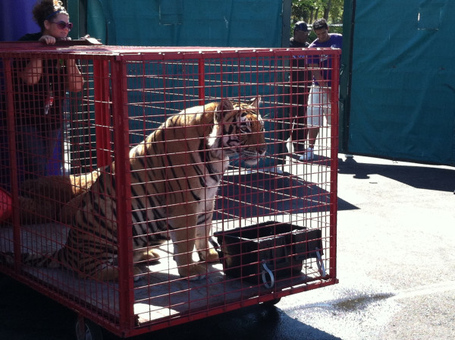 Washington did have a real live tiger at practice on Tuesday, thus preparing the Huskies for the wrong animal encounter on Saturday. (A bunch of live, drunken Cajuns in a cage swilling whiskey and screaming unbelievable, incoherent oaths at U-Dub players would have been more appropriate preparation, but whatever, Sark wanted to play with a Tiger, man.)

SETTLE THE HELL DOWN IT'S SEPTEMBER. Yes, having polls in September is dumb as hell, and there is no real reason to do it besides the innate joy of ranking things. It does have the effect of setting position bias in the heads of the voters, i.e. "I cannot move team A up even though they won because teams B and C have not lost, either."

Still, getting really bent over them at this point is hysterical, especially for someone like USC who will be able to bounce up over an undefeated team with ease because Lane Kiffin is not afraid to straight set someone's ass on fire in the fourth quarter. (Unlike Alabama, who shuts things down in the second half for the same reason your computer goes to sleep when you have finished your work: efficiency.)

It's not like voters would just shunt in the two best SEC teams into the BCS title game no matter what, because [REDACTED BY MIKE SLIVE]

GUYS, OKLAHOMA MIGHT PULL THIS ONE OUT! It'll still be close, but Bob Stoops will find a way.

TENNESSEE: SLOWLY HOBBLING TO THEIR FEET. The ground attack ain't all that, but existence of something on the ground does surpass whatever nothing they had last year.

WHAT ARE YOU DOING I DON'T EVEN-- Georgia Tech fans remain weird, thefty.

SOURCES HAS BEEN THROUGH THINGS. Brett McMurphy has been through things, man.

ETC: Russia is the nation of love, and faking your own death to make her "realise how empty her life would be without me and how life would have no meaning without me." What the hell, Billy Clyde? This quiz is bullshit, dude.