THE RETURN OF SPIKE FACTOR

Share All sharing options for: THE RETURN OF SPIKE FACTOR

Gather completions while ye may,
Defensive ends are still a-flying:
And this same offense that moves to-day
To-morrow will be dying.

Every historic discovery begins with a small but meaningful step, and Spike Factor is no different. Last year's Kentucky-LSU matchup was that small step, so it's time to embrace the future of lazy and mean-spirited statistical analysis.

Trust us. This will make the mockery more fake accurate.

There were a number of strong candidates for the first ever Tetanus Spike of the Week, but, in the spirit of tradition, we'll start with the original article. In their Sunday matchup against Louisville, the Kentucky Wildcats would have been just as successful spiking the ball on 31% of their offensive plays (22/69). How does that number compare this week? ACTIVATE ENGLISH-MAJOR MATH NOW!

THE NEW KID IN SCHOOL

Let's get this out of the way now - UMass is a brand new FBS program and some hiccups are to be expected. And by hiccups I apparently mean drowning in your own vomit, because fifty-fucking-five percent of the plays the Minutemen ran were as productive as intentionally doing nothing. That's almost impressive in its uselessness. Try to imagine if over half the days you showed up at work, your company would have been just as productive if you stayed home. You are now a Subway sandwich artist.

BECAUSE YOU ARE WONDERING

Florida's Spike Factor comes in at 29%, thanks almost entirely to a 13 play drive in the first half where every snap went for at least some gain. Florida Football - Bad But Only In Small And Consistent Ways That Will Never Be Fixed All Season Maybe You Should Take Up Woodworking!

Context demands that we look at a few programs who scoffed at the mere concept of the Spike Factor this week:

PROOF OF CONCEPT
Sure, Spike Factor seems like a flawless measure of offensive ineptitude on paper, but how does it work in real world application? Glad you asked, prospective investor. Let's take a look at two close games to see if there's a correlation between victory and low Spike Factor:
BOOM THEORY VALIDATED EAT IT HATERS.
SIMPLY A DISHONOR TO BE NOMINATED
There can be only one winner of the coveted Tetanus Spike, but we'd like to acknowledge those who came oh-so-close.
WASHINGTON STATE, 44% - You can go ahead and start making Jeff "Tuel Time" jokes now because holy shit have you watched a Home Improvement rerun in the last four years? That shit is terrible. Washington State-in-this-game terrible.
MICHIGAN, 42% - Let's go to Nick Saban for reaction to the news that 60% of Michigan's plays on the first four Wolverine drives were as effective as spiking the ball:

AND THE WINNER IS 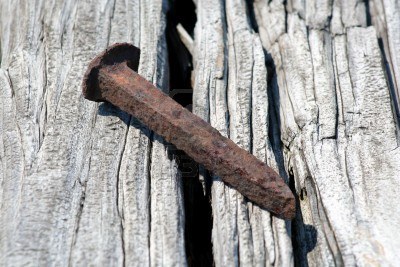 That's a truly horrifying number, even considering Michigan State's defensive talent. Of Boise's ten drives, five had a 50% or higher Spike Factor. Poor Kellen Moore had to watch this shit on the sidelines. That's like starting a successful farming operation, retiring and putting your son in charge, and watching him turn it into an airport that only has US Airways flights.

Therefore, with the appropriate amount of disgust, we officially award the first Tetanus Spike to the Boise State Broncos. (We still think you'd probably beat Florida, for what it's worth.)