EDSBSGPS: WHERE T'INTERNET AT, WEEK 5

It's a cold, lonely world out there, WebPals. Stick together out there, and if you must watch Buffalo-UConn, make sure you have backup. (If you're going in person, bring backup but no supplies - you're better off slipping into a coma due to dehydration.)

Share All sharing options for: EDSBSGPS: WHERE T'INTERNET AT, WEEK 5

Marveling at the unlocked ammunition dump that is Baylor-West Virginia, and then spending the day at Tennessee-Georgia, so the look for the shirtless man shouting "ROLL TIDE" with Mike Shula in profile shaved into his chest.

Baylor-West Virginia, Arkansas-Texas A&M, Virginia Tech-Cincinnati, Tennessee-Georgia, Ohio State-Michigan State, Louisiana Tech-Virginia, FSU-USF (THE PALINDROME BOWL), South Carolina-Kentucky, Oregon State-Arizona. Most of these are only being selected because there isn't anything good on basic cable movie-wise. DAREDEVIL IS SHIT, TNT.

Not the restaurant, but the fictional setting of the hit Game Boy adventure starring Kirby. You remember - the series where Kirby sucks up and eats his foes and then absorbs their powers. It's a metaphor for Urban Meyer's recruiting strategy. 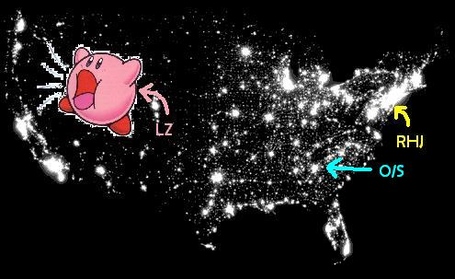 (Can you tell we're anticipatorily bored? Shit, you should be, too.)