Would this tree lie to you? Oh, yes. He's not to be trusted ever, especially after midnight and around alcohol and firearms. The Factor Five analyzes Stanford's road trip to Washington tonight, and wait where did Tree go--

Today's Factor Five Five Factor Preview sails into the port of Seattle, ignores the man on the dock waving frantically to reduce speed, and rams directly into the rocky shores of the U-Dub campus where the Stanford Cardinal play the Washington Huskies tonight. What do we know about this matchup? That it's got hardnosed, blue collar football written all over it. We also know that the Washington Huskies are involved in it somewhere, too, possibly as kindling for Tree to have one of his extremely traitorous bonfire parties he's so fond of. YES HE'S AWARE OF THE IRONY AND PERVERSITY AND NO HE DOES NOT CARE.

Nebulous Statistical Comparisons of Dubious Validity: Stanford does have the number one rushing defense not just in the Pac-12, but in the country. That is very exciting, even if the most fearsome entry in that very small data set came against a USC team playing with its backup center. They're also second in pass efficiency defense, held USC to 1/13 on third downs, and currently sit at 93rd in the nation in total offense. Statistically, if you trace this picture out, you will see the outline of a rhinoceros with an internship at Google. This is the 2012 Stanford football team.

Washington has successfully reversed the failures of 2011's team that gave up 382 points to Baylor in the Alamo Bowl. This reversal is literal: now Washington has something like a functional defense, and yet cannot score. As we pointed out in the Alphabetical today, Washington gained just 26 yards against LSU, and is now facing the number one rushing defense in the nation. Bishop Sankey, pray for thyself, fool. (That is actually U-Dub's running back's name in real life.)

Washington's mascot--Harry the Husky, a plushie-style anthropomorphic Husky--is unique in having a brother Hendrix who lives at UW-Tacoma. They don't talk after a protracted legal battle over their father's will, but the children of celebrities often suffer from family strife you can't possibly understand. Their father was Balto, and he was a better dog than either of them will ever be. 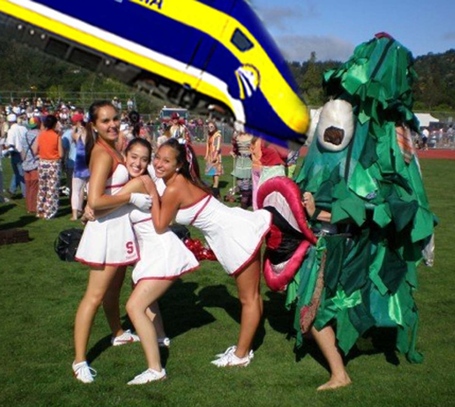 AURA: At one time, this went entirely to Washington, and in theory still should. Husky Stadium has views of the water, big, noise-amplifying overhangs, and on the right night still has a little shake to it. (Watch the cameras on games with an actual screaming crowd involved: they still move more than you might want them to.) And yet this is the image you get when you search for "Washington Huskies stadium crowd": 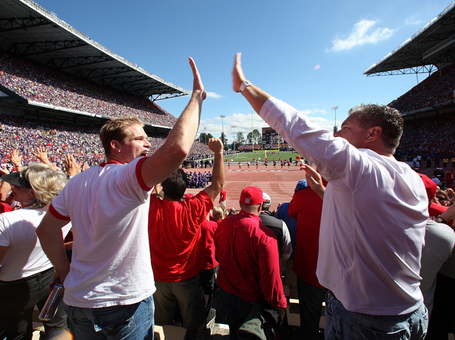 Caption: "Fans of the Nebraska Cornhuskers cheer after the Cornhuskers scored their first touchdown."

It's a narrow victory, but it's a victory, and given the recent history of the program Huskies fans will take it.

ADVANTAGE: WASHINGTON (ADDENDUM! ESPECIALLY SINCE THEY'RE PLAYING AT THE SEAHAWKS' STADIUM WHILE HUSKY STADIUM IS BEING RENOVATED! SCIENCE!)

ADVANTAGE: Washington. Far better quality on both sides of the field than we thought, but the Huskies bring the thunder so hard we could have gone two deep and turned this into a real blowout, moniker-wise.

GRUDGES/SCORES TO SETTLE/SHEER CUSSEDNESS: Six out of the last seven have ended up in Tree's unspeakably filthy...pockets? Whatever Tree has, which we assume is a fanny pack filled with DMT and a credit card with an unreal maximum balance. Steve Sarkisian would certainly want to demonstrate some forward momentum as a program after turning the Huskies into a 21-20 team, rebuilding the program after the Willingham years, and now entering the phase in his career where he could become a victim of his own raised expectations. He would probably want to do that with a win over current conference power Stanford at home. We all want things, Steve.

SUMMARY: 3-2, STANFORD YOU'VE BEEN FACTOR'D. The Factor Five--we think--is off to a 3-0 start on the year, and thus yielding far too many good results. This means immediately extract gold fillings from all available teeth and place them on the Huskies, but we're bound to our methods and have to ride with Tree tonight. And when you ride with tree, you let him drive the moped wherever he wants to take it. (He wants to take it to the dump and shoot rats off garbage piles with a pellet gun until the cops show up, and you cannot stop him.)