The Curious Index is just staring at that dog. You see it too, right? Do its eyes follow you wherever you go in the room? Are you thinking about hog snout lunch and Jackie Sherrill's golden handshakes? You should be, because ALL HAIL HYPNODAWG. 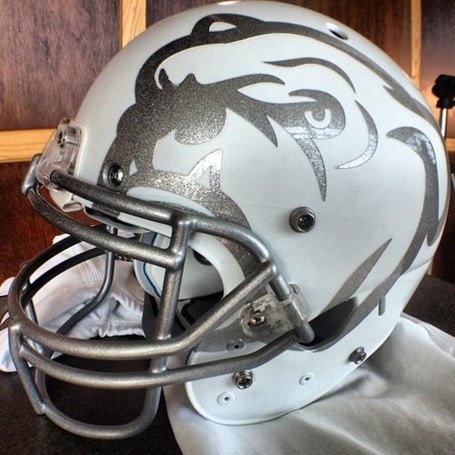 Commemorating the Snow Bowl is something we will always endorse, but add Miss State's Hypnodawg logo on the side and the applause is downright hand-destroying from this end. (This logo floats on Miss State's gigantic Jumbotron at the end of games, staring down like it's going to kick your ass into eight pieces if you don't pick that trash up.)

THE GLORIOUS HOG-SLAUGHTER. The best preview piece in college football remains the Tailgate, which this week is about Arkansas, and thus includes ample images of disaster, fire, and the interesting news that the Solid Waste Director of Fayetteville, Arkansas gets thirty days paid vacay a year. You know what you say to the man who takes shit out of your house and puts it in [WHEREVER SHIT GOES] when he asks for more vacation and money? YOU GIVE HIM MORE MONEY BECAUSE HE IS THE SHIT-MAN.

YOU NEED A SODA AND A HUG. Aw, buddy, it's not so bad. (But you really should burn every picture of that billboard.)

NOT BAD, ACTUALLY. It's not anything you'd voluntarily listen to, but it's a passable Bubba Sparxx imitation. We hope this is Eric Crouch's alter-ego, because he really needs more to do these days.

WHAT THE HELL DID AUBURN DO TO LSU'S OFFENSE? Mostly just loading the box and waiting for the passing game to misfire, something that happened pretty frequently last week. Hey, blueprint!

WORLDWIDE ONE GIF AT A TIME. LSUFreek's work was on United last night, and kudos to him for that. This is all a lead-up to the eventual full profile on him, which comes out in the next few weeks. (Seriously, someone wrote one for a major news outlet. It's fantastic.)

ETC: My god that man was really thinking this, wasn't he? The guns are back in their rightful place. Brian Phillips on Steve Reeves is of course worth your time. The Hawkeye Nice guy is back, and his dissection of the Big Ten is more devastating than anything we could ever construct. Hello, old friend. Drink up, Jim. It's chianti.