The college football season is eventually going to turn into the mile-a-minute, thrills-'n'-chills roller coaster we've all been hoping for. It just ain't gonna happen this week.

Share All sharing options for: WEEK 5 PREVIEW: BROUGHT TO YOU BY GM CIRCA 1982 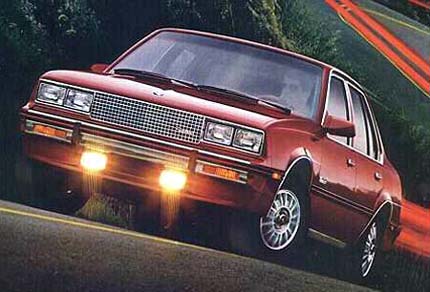 If you've watched this week's episode of Shutdown Fullback, then you already know the dirty secret about Week 5: The slate of games, well, it kind of blows. It blows in much the same way General Motors cars did in the 1980s: All the proper parts were there — wheels, an engine, seats, a transmission — they just weren't assembled in a way that worked, or made sense, or inspired the slightest bit of desire or passion in a potential buyer. Similarly, there are plenty of good teams playing this weekend, it's just that, for the most part, they're not playing each other.

Fear not: Just as the godawful Cadillac Cimarron eventually gave way to the CTS, this season is eventually gonna get good. You're just gonna have to wait another week for that to happen. For now, you'll have to trundle along in your Cimarron and try to convince yourself it's a poor man's BMW as opposed to a rich and extremely dumb man's Cavalier. Here's the itinerary for your trip (all times EDT).

What you'll be watching: #8 Stanford at Washington (ESPN, 9 p.m.)
Could be somewhat interesting right up to the point where Washington's offense takes the field. Which is why you shouldn't forget to DVR "Parks and Recreation" at 9:30.

What you'll be watching: Hawaii at BYU (ESPN, 8 p.m.)
How will the Cougars follow up last week's amazing six-point outburst against Boise State? Our guess: by going for two on their very first play from scrimmage against Hawaii. Ref: "Uh, sir, you haven't scored a touchdown yet, and you're at your own 23 yard line." Bronco Mendenhall: "SHUT UP. WE'RE DOING THIS. IT'S AN HONOR THING NOW." (Lane Kiffin, watching from his office: "Balls, bro. Likin' it. Likin' it.")

What you should be watching instead: If this game turns out to be another offense-deprived slog, I'm honestly kind of curious about "Last Resort" on ABC at 9 p.m., a prime-time drama featuring Andre Braugher as a nuclear sub captain who goes rogue after being ordered to launch a nuclear missile at Pakistan and ends up commandeering an uninhabited Pacific island with his crew. If that seems rather gravitas-heavy for the network that'll be airing "666 Park Avenue" just a couple nights later, well, maybe that's the point.

What you'll be watching: Baylor at West Virginia (FX, noon)The gruel at the noon hour this Saturday is even thinner than usual. If you're a Big Ten fan, you at least get your choice of three gruel varieties: the chewy gray mystery meat of Penn State-Illinois; the limp broccoli of Northwestern-Indiana; or the unidentifiable-morsel-that-looks-like-meat-until-you-bite-into-it-and-realize-it's-a-carrot of Iowa-Minnesota. In all three cases, warnings about pregnant women and heavy machinery obviously apply. If you're in a part of the country where you can pick up the SEC Network, you can tune in to Arkansas at Texas A&M at 12:21 to see just how many points Kevin Sumlin's Aggies can unload on the Razorbacks before Arkansas players can be spied openly playing Words With Friends on their cell phones on the sidelines. Otherwise, the slate's dominated by games of the "competitive by way of both teams being equally mediocre" variety.

Except for this one, which reads like the football version of a buddy-cop movie — crusty, by-the-book Art Briles and cocky young maverick Dana Holgorsen on a mission to clean up the mean streets of the Big 12 the only way they know how: deep balls. The only thing they hate more than each other is defense. Don't miss "ART & HOLGO," coming annually to FX.

What you'll be watching: #14 Ohio State at #20 Michigan State (ABC, 3:30 p.m.) Baylor-WVU has the highest over/under of the weekend, at 81; this one, at 42, is tied for the lowest with Buffalo-UConn. That alone should not automatically disqualify it from your viewing slate, but this should: Ohio State only led UAB 21-15 early in the fourth quarter last week, while Michigan State was only up 9-7 on Eastern Michigan at the same point in their game. And this is the B1G's marquee matchup for this week! Other than the fact that "Gameday" will be in East Lansing for this game, which means there's a teeeensy possibility MSU alum Chris Hansen could get tapped for Guest Picker honors, I can't think of any reasons to muster excitement for this one.

What you should be watching instead: Tennessee at #5 Georgia (CBS, 3:30 p.m.)As a Georgia grad living in sin with a Tennessee alumna, I can confidently state that one of two things will happen in this game:

1. Telltale smoke begins to rise from Derek Dooley's Tennessee career before the first quarter even ends as Todd Gurley goes balls deep on a defense in its first year transitioning to a 3-4 alignment. Gurley finishes with 300 yards and places himself squarely in the middle of the Heisman race, something we can all chuckle about a year from now when he's kicked off the team for getting caught bringing a blunderbuss onto campus in his backpack.

2. An overconfident Georgia defense gets lit up by Tyler Bray, who's cut his P90X with a little powdered rhino penis because the Chinese dude at the head shop right off campus told him to and ends up throwing for 400 yards and four TDs. If you are rolling your eyes and saying there's no way that could happen, then clearly you have forgotten that just three years ago the Bulldogs got shelled by Jonathan fricking balls Crompton. (Please share your technique with me, as I would like to forget this as well.)

Either way, it should be exciting.

What you should be watching instead: #4 Florida State at South Florida (ESPN, 6 p.m.)
Not suggesting you should watch this instead of Texas-Okie State, exactly, but at the very least some strategically timed channel-flipping is in order. Something interesting's bound to happen when you put FSU and B.J. Daniels on the same field with one another. Not good or even proficient, mind you, but interesting — like three years ago, when Daniels completed only eight passes but still clapped up the FSU defense to the tune of 215 yards and two TDs? Remember that? Yeah. Like that.

What you'll be watching: Ole Miss at #1 Alabama (ESPN, 9:15 p.m.) Not really sure what this game is doing sitting here so late on the schedule, but it's probably been slotted just after little kids' bedtimes for a reason. Young, impressionable minds shouldn't be exposed to the kinds of things Nick Saban's gonna do to Hugh Freeze.

What you should be watching instead: #18 Oregon State at Arizona (Pac-12 Network, 12 p.m.)Arizona may have turned out to be a bit of a mirage — getting buried by Chip Kelly's points machine up in Eugene will do that to you — but Oregon State has quietly turned into one of the more interesting stories of 2012. Other than this, your only choice is Oregon at Washington State on ESPN2, and . . . naw, man. We prefer to think of Mike Leach as he was — strong, unbowed, winning games 51-48 just because he could. HE WAS BEAUTIFUL, DAMMIT (and maybe one day he will be again) (just not this season).