This week, the Buddies do their best to remember what the hell King Philip Cried Out For Good Soup was supposed to mean.

Football is a sport where man rejects the social contract and embraces his animal side. Instinct, not reason, rules the day, and from whistle to whistle there are the hunters and the hunted. Bye weeks are the peaceful times, the times when coaches stop thinking of each others as competition in the food chain and start seeing themselves as...

STANFORD COACH DAVID SHAW: Now, everyone remember the plan when we get to the National Zoo - we're splitting up into three groups, and I'll give each group leader a third of our lunch money. Around 3:00 or so we'll all meet up again and head out. Everyone okay with that?

MIDDLE TENNESSEE COACH RICK STOCKSTILL: Is this gonna be like last year when the coaches from the big schools got to go to the front of the line at the petting zoo and the Sun Belt and Conference USA coaches got stuck with the lousy itinerary? I ain't falling for that "elephant enclosure cleanup adventure" mularkey this year.

SHAW: The current Buddies Zoo System is in place until 2014, and there's nothing I can do about it, Rick. Everyone's heard the complaints about the BZS and that's why we're changing it.

LOUISIANA LAFAYETTE COACH MARK HUDSPETH: So eventually everyone's going to get the same access and treatment on these trips?

SHAW: Yes. Unless a certain part of the zoo has its own contract with a conference, of course. It's not up to me if the Jungle Safari decides it wants to take an ACC coach and a Big Ten coach every year. Ok, everyone out of the Buddymobile, and remember - 3:00! 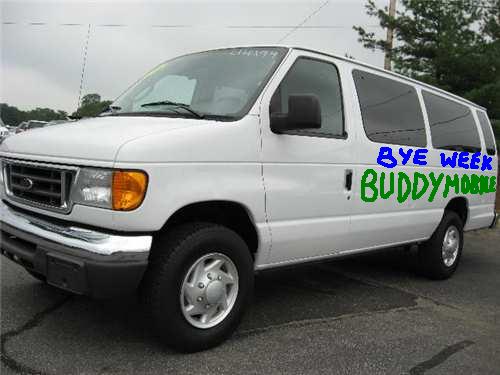 BUTCH JONES: This is really interesting - it says here that most reptiles have to hold their breath when they swallow because they lack a secondary palate.

RHOADS: Hey Gundy, I seem to recall you lacking a secondary!

JONES: Reptilian skin also lacks a dermal layer and is much thinner and weaker than mammalian leather, which is why it is used for decorative purposes only.

RHOADS: Decorative? Didn't I hear someone say that about your field goal kicker, Mike?

SHAW: Knock if off, Paul. Has anybody seen Spaz-aw, hell, Frank, what the hell are you eating? 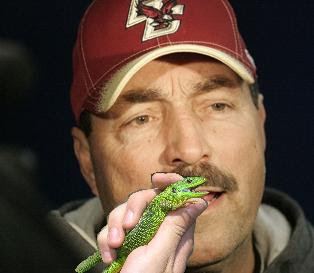 JONES: Gross, Frank! What the hell are you doing that for?

SPAZIANI: cuz i am hot and swetty and lizurd blood is cold

JONES: That isn't what they mean when they say reptiles are cold-blooded, you idiot!

RHOADS: Cold as the Cowboys in Ames! Get over here so I can give your snake head a noogie, Mike! O'LEARY: (over radio) Did you know I used to be a submarine captain?

HUDSPETH: Shut the fuck up, George.

STOCKSTILL: I thought you weren't even allowed on this trip?

O'LEARY: THAT'S UNDER APPEAL YOU PIECE OF SHIT.

SARKISIAN: ...beaver, check, wildcat, check, buffalo, check. Ok, I got every mascot left on the schedule except a Ute. Brown, you got the number of any good kidnappers?

HOPE: What? You can't hunt a PANDA! They're endangered! And how the hell did you get a gun into a zoo?!

BROWN: Smuggled it in Tuberville's hair! That there is one well-coiffed arsenal, son! 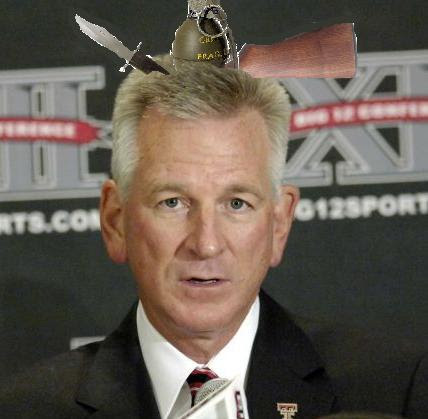 TUBERVILLE: I prefer to call it my "mystery thicket."

BROWN: Need bait to catch a critter, dummy! And ain't nobody gonna notice when some Indiana coach goes missin.

WILSON: You've got me there, dammit.

HOPE: Mack, you really, REALLY can't do this.

BROWN: Shut your yapper! Now get in there, Kevin, and Tommy - you keep that lustrous mane ready 'case I need to reload!

SHAW: Dammit, where the hell are those guys? I told 'em a million times - we're leaving at 3 and that way we can beat traffic. I bet Sarkisian made them stop in the gift shop. He loves that overpriced taffy, the moron.

SHAW: Hello? Mack, where the hell are you guys?

BROWN: Rest of them fellas ain't gonna make it, partner, but it don't matter because I BAGGED THAT JUVENILE SUMBITCH! 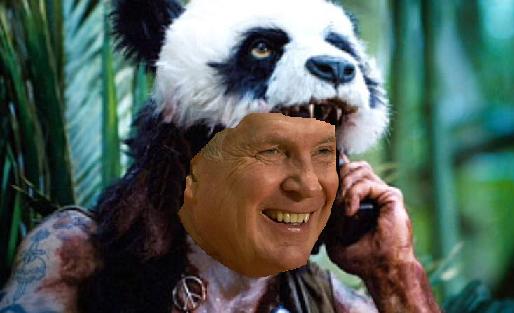 BROWN: Now come pull that van around the back so I can tie this carcass to the top. We're having panda kebob tonight, boys!