Today's Factor Five Five Factor Preview tackles the important issues surrounding the Thursday Night Special for this week, the 9:00 p.m. EST matchup between BYU and Boise State. The game is a throwback to old-school WACtion, a type of football now kept alive in two evolutionary dead-ends, New Mexico State and Idaho, the Panda and California Condor of football. Is Idaho the Condor because of Robb Akey's resemblance to a talkative but charming vulture? Yes, yes they are. 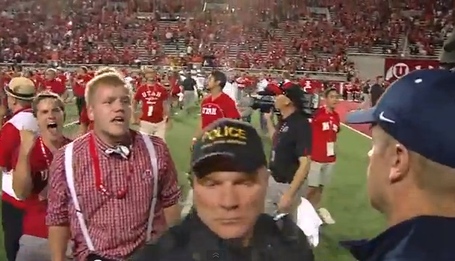 You have no idea how close to death you came, child.

NEBULOUS STATISTICAL COMPARISONS OF DUBIOUS VALIDITY. Boise's defense is a top 25 scoring defense at this point, edging in at #24 after two games and carrying the load for the Broncos while Joe Southwick matures into a serviceable quarterback. Another six months or so sleeping in the football-IQ enhancing slime Chris Petersenfound in a cave in the Sawtooths fifteen years ago and he'll be fine.

BYU comes in dominating the run defense category, but muddle that stat's power a bit by remembering that BYU has faced some bad rushing offenses in Wazzu and Utah, and then taken that one-sided card as a license to tee the hell off on the other team's skill players. Their coach is named Bronco and looked like he was going to beat someone's ass into the ground after the Utah game, so yeah, they're gonna hit.

Advantage: Boise State. Just by a hair thanks to slightly tougher competition with the Michigan State road game. YOU TRY DOING THIS WITH A TINY DATA SET, JERKBAITS.

MASCOT: Not a stellar unit here. Boise's Bronco is an autotroll of BYU's headcoach, so that's a plus, but he does resemble one of those horse masks the internet is so very fond of, so...well, that's good, actually. 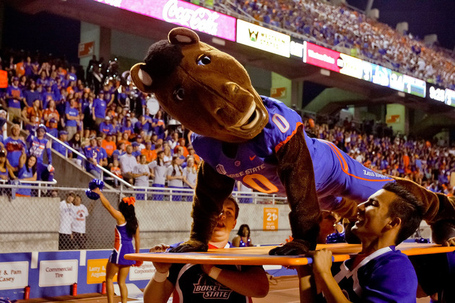 No biggie: just humpin' a door in a horse mask.

It is cheating to consider secondary mascots, but if you have a subsidiary mascot who serves as a tee-fetching dog on kickoffs, we will also lean toward loving you and everything you do, Boise. Meanwhile, BYU's mascot, no matter how clean they get him, still looks like a plushie version of a homeless mountain lion. Aren't all mountain lions homeless by definition? Yes, but some are wayyyyy more homeless than others, and Cosmo is the most homeless-looking of all. Should have stuck with Cleo and Tarbo, Cougars.

AURA: it really doesn't matter if you know it's blue. The gulf between your brain knowing this and seeing it for the first time is immense, because when we walked into Bronco Stadium we said what every other idiot says: OH MY GOD DUDE IT'S REALLY, REALLY BLUE. Boise is 75-3 at home since 2000, and for a lot of reasons: they're very good at football, the crowd is far louder than that many people have a right to be, and seriously, it's like the kind of blue you imagine the genitals of an aroused Na'Vi to be. If you have never imagined this exact horrifying shade of blue and its attendant parts, you are welcome.

Advantage: BYU. Like, there's a thousand Polynesian names we didn't even use there.

GRUDGES/SCORES TO SETTLE/SHEER CUSSEDNESS. They've only played twice, a fact that shocked us until we remembered that merely being close geographically has nothing to do with how many times you've actually played. BYU lost both games in a 2003-2004 home and home, back when Boise State was the up-and-comer, and BYU was the established upstart-turned-respectable BCS buster.

It didn't turn out well for BYU when they first met, but this is different this time because...well, because Boise's better this time, and BYU's offense is inconsistent, and both teams are entering new affiliations taking them farther and farther from each other. Their relationship is like this one-off affair they're picking up again because well, it's a lonely night on the high prairie, and the band is playing this kind of passable version of "Give Me Just One Night (Una Noche)" by 98 Degrees, and well, hell, when will one get the chance to party at the Holiday Inn Express in Boise?

Just like the last time, it'll probably end badly for BYU, but what's life without a few lost evenings and misplaced room keys? What happens in Boise stays in Boise, usually because it can't get too many fair shots at BCS slots, but also because it's a party town where the Basque sausage washes away the hangover. (The one you'll have despite having not one drop of alcohol tonight, BYU fans, because losing makes its own delirium tremens.)

FACTOR FIVE FIVE FACTOR TOTAL: 4-1, BOISE. The Factor Five sits at 1-1 this season, which is pretty good for an entirely unscientific method of choosing a victor in a football matchup. It's like the 900 word coin flip of columns, really.