SEVEN REASONS WHY THE RIO GRANDE RIVALRY DESERVES YOUR ATTENTION

Share All sharing options for: SEVEN REASONS WHY THE RIO GRANDE RIVALRY DESERVES YOUR ATTENTION

1. This shit is old! The first New Mexico-New Mexico State slapfight took place in 1894, before South Carolina and Clemson, Oklahoma and Texas, or Ohio State and Michigan started their rivalries. Both schools agree that New Mexico won that first game. They both do not agree, however, on the final score - New Mexico says it was 25-5, and State says it was 18-6. To be fair, in the late nineteenth century many local governments had abolished math, or "Beezelbub's Figures" as they called it.

3. This game is like, 1/3 of the victorious team's win total for the year! Take out going 7-5 in 2002 and New Mexico State hasn't finished with a winning record since 1999, which is what the Prince song is about. New Mexico has been a little better in that time span but has had 3 straight 1-11 seasons. Forget some bullshit Big Ten game where the winner gets a giant rest stop souvenir. Wins are precious in these parts, so you must fight for them or starve.

4. The rivalry goes beyond the field! Actress and director Penny Marshall is a New Mexico Lobo. The late astronomer Clyde Tombaugh, who discovered Pluto in 1930, was on the faculty at New Mexico State. These two fucking HATE each other. Marshall bankrolled the scientific effort to declassify Pluto as a planet, and Tombaugh's ghost spent most of 2000-2003 haunting Blockbuster Video stores and scratching A League Of Their Own DVDs.

6. There is was a cool traveling trophy! From 1993-2000 the winner of the Rio Grande Rivalry took home the Maloof Trophy, which I cannot locate a picture of. This does come up as part of the Google image search, however. 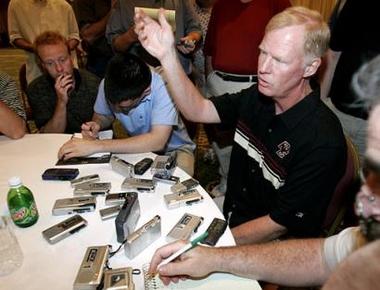 So yes, the winner of this game wins one (1) tape recorder ACTUALLY TOUCHED by Tom O'Brien. (The Mountain Dew is off limits because Tom O'Brien would never touch a Mountain Dew.)

7. If you have poor eyesight you will have no idea who's winning! New Mexico's colors are listed as Cherry and Silver. New Mexico State's are Crimson and White. Now you know what it's like to live with tritanopia!