During the season, coaches are warring generals, constantly looking for an advantage that might give them victory over a hated foe. Only the thinnest veneer of decorum exists on the field before kickoff, and after the game there is only a brief handshake before it is on to the next opponent. This is a circle of death that never ends for a coach.

Except for the bye week. Only then does a coach learn to reconnect with his fellow man, to share some common humanity and remember the value of empathy and cooperation. Only then do coaches become...

OKLAHOMA COACH BOB STOOPS: Guys, I really appreciate you coming over here on your weekend off and helping me clean out this attic. I got a little bit done in the offseason as a team building exercise but, well, it's a big job!

AIR FORCE COACH TROY CALHOUN: I saw your brother downstairs. He looks...different. Is everything okay? 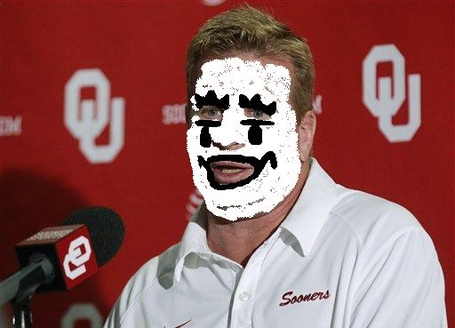 KENT STATE COACH DARRELL HAZELL: Jeez, Bob, you've got towers of boxes all over the place here and the floor is covered in old tangled Christmas lights and extension cords. This isn't exactly a safe working environment. You really brought your players up here?

STOOPS: Look, well over 40% of those kids are still perfectly healthy. Ok, maybe not WELL over. But over!

TULANE COACH CURTIS JOHNSON: So what the hell do you have up here anyways? This box says "Barry Switzer's Santa Suit" but all it has is a red cummerbund, some cowboy boots, and a Christmas tree shaped bolo tie.

STOOPS : To tell you the truth, I'm not sure what all is up here. I know, as a coach I should be better organized. I guess whenever I didn't know where to put something I just stashed it up here and it all piled up. 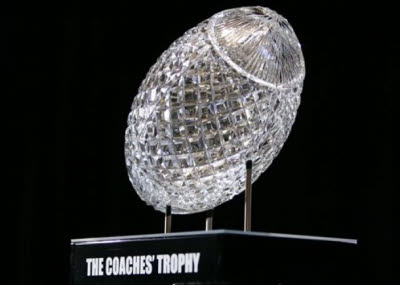 OREGON STATE COACH MIKE RILEY: What the hell is your national championship trophy doing up here???

STOOPS: Well, not to brag, but I've got a lot of trophies and sometimes storage just becomes a problem. I like to keep them all out of sight to keep myself hungry and focused on future achievement. Don't want to rest on my laurels or anything like that.

CENTRAL MICHIGAN COACH DAN ENOS: Franchione, you mind getting up off your ass and helping me out here?

ENOS: What the hell does that even mean?

STOOPS: Love your enthusiasm, Steve! Gonna be a shame when you get passed over for Mark for the Tennessee job.

STOOPS: Nothing, buddy! Why don't you give Jeff a hand with that box over there?

BUFFALO COACH JEFF QUINN: This thing weighs a ton! What on earth do you have in this, Bob?

(They open the box in question.)

STOOPS: Oh man, I nearly forgot this was in here! Lotta good memories from this game, might be the best our offense ever executed. I remember, right before kickoff, I took Adrian Peterson aside and said, "Adrian, I need you to be our star tonight." Adrian looked right back at me and said "I'm getting a kerjillion yards tonight, Coach." And he did! Orange Bowl record that stands to this day, two kerjillion and thirvteen yards rushing. Man, what a championship that was. 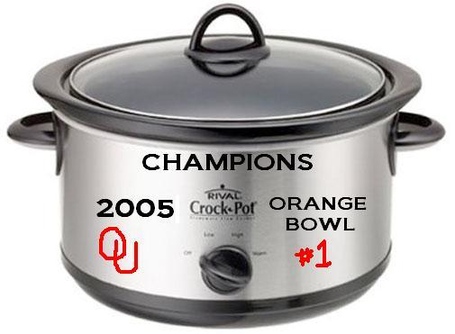 HAZELL: Bob, what the hell are you talking about?

CALHOUN: That stench! Is...is there old beef roast in that thing?

QUINN: I think what you're smelling is this. 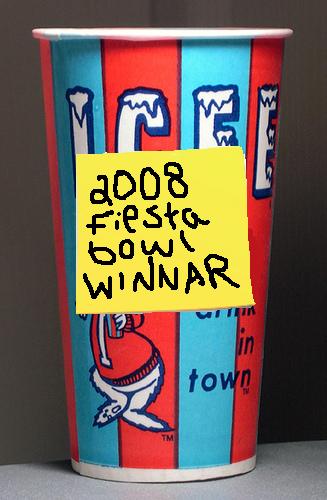 STOOPS: Boy, we really took it to those Mountaineers! A really great game all around - they jumped on us early for two field goals but, you know what, we didn't flinch. Took it right to em, and shut their running game down. I think I read after that game that Noel Devine was so depressed with how badly we stuffed him that he quit football and went to culinary school. Opened up a crepe stand. Guess that's just how bad we flattened him! Get it? Crepes!

RILEY: Bob, I...you know that's not what happened at all, don't you?

ADDAZIO: WHY STEVE NOT GET ICEE STEVE NOT PEE IN CAR ONCE TODAY

FRANCHIONE: (begins giving charade clues to no one in particular)

JOHNSON: I don't even know what this is. 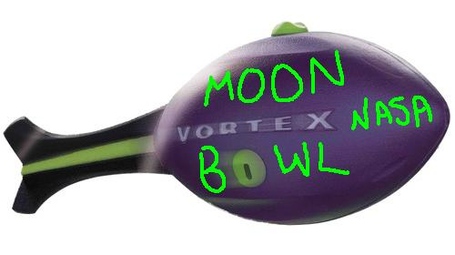 STOOPS: Hooo boy, bet you fellas have never seen one of those! That's what we took home for winning the 2003 Big 12 Championship Game on the moon! Yeah, that was a real dogfight, and Bill Snyder really had a big advantage being born in the Sea of Tranquility and all, but we were the better prepared team that day and it showed. I knew we were gonna win when the whole team spent the off day in our moon hotel instead of going out to the moon bars. Moon discipline is what makes Sooner football great.

ENOS: Bob, you're talking crazy! You lost that Orange Bowl and that Fiesta Bowl AND that Big 12 game, which was in Kansas City? 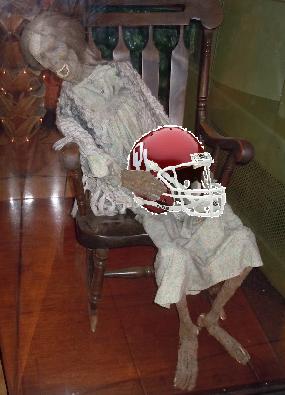 (The other coaches shout in terror and flee, except for Franchione, who faints.)

MIKE STOOPS: Did that shit fool those stupid bitches?

BOB STOOPS: Fuck yeah it did. Now check Franchione's wallet and get his credit card. TICKETS TO THE GATHERING ARE ABOUT TO BE MOTHERFUCKIN' OURS.