Each play's death diminishes me
For I am involved in mankind.
Therefore, send not to know
For whom 4th down is called,
It calls for Kentucky.

As promised, all of the collected Spike Factor statistics are being assembled for public consumption - we've got all of Week 1 up already and Weeks 2 and 3 should be complete soon. Sadly for New Mexico fans, we're not doing every FBS team. It's for the best, anyways. Bob Davie might get dehydrated and confused and start trying to win the Tetanus Spike on purpose.

Kentucky turns in a grade of 37% (30/79) for this week's Spike Factor, its highest score of the season. This is the part where we say anything we want about Kentucky because all of their fans have stopped reading about football for the year and have moved onto basketball recruiting news. It's not libel if they don't know about it! (A message from the EDSBS Legal and Poison Treatment Department.)

It'd be easy to look at Virginia Tech's 49% (28/57) Spike Factor score - especially the horrifying 57% the Hokies put up in the second half at Pitt - with a mixture of disdain and disgust usually reserved for that one time I saw a homeless man pooping in between two parked cars. But that wouldn't tell the whole story! About this game. Not about the homeless man pooping between the cars. That one sort of tells itself.

No, what'd you also need to know is that the Panthers kept their Spike Factor down to a positively svelte 20% (17/81), substantially lower than in Weeks 1 and 2. Being offensively inept without forcing your opponent into similar struggles is a bad combination, Virginia Tech. Almost as bad as two parked cars and a hobo with his pants around his ankles. IT HAUNTS ME TO THIS DAY. 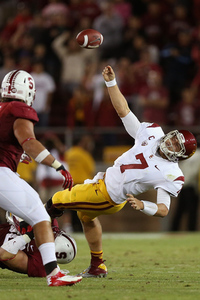 It may seem like piling on because, well, it is, but USC is this week's runner-up after 36 of the 68 plays they ran against Stanford went nowhere, for a Spike Factor percentage of 52. I'm sure Lane Kiffin will swallow his pride and refuse to lay the blame with someone HA HA FOOLED YOU. Tetanus glory eludes the Trojans this week, however, as we reserve the greatest of ignominies for...

AND THIS WEEK'S TETANUS SPIKE GOES TO 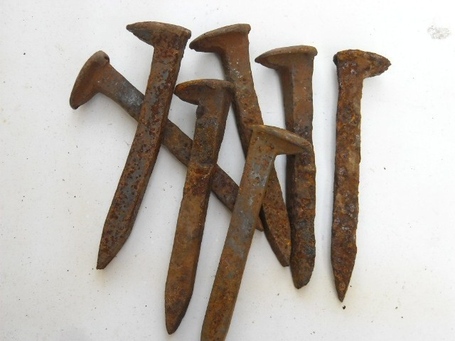 WAKE FOREST! Yes, the Demon Deacons are kind of a shitty team. Yes, Florida State's defense is like a minigun that shoots bears. Not "a minigun with which bears are shot," mind you, but rather a "minigun which has bears for bullets ow my body is full of bears." Yes, there's a lot of pressure playing on the road in a stadium three-quarters full of future personal injury plaintiffs.
None of that excuses Wake Forest's Spike Factor score of 56% (33/58). That may very well be the highest score we see all season. To give you a sense of scope for a failure of this magnitude, Wake had fourteen drives, and only two of them had a Spike Factor below 50%. Spare your team in film review this week, Jim Grobe. Show them something more upbeat, like Angela's Ashes.