EDSBSGPS: WHERE T'INTERNET AT, WEEK 3

Share All sharing options for: EDSBSGPS: WHERE T'INTERNET AT, WEEK 3

When the Internet ends, we're all reborn as footbaw watching sprites in a digital urn.

I decided to go to the Funky Town one day to meet Run Home Jack for dinner. While dining on a delicious meal of grilled Volunteer in Blue and Orange sauce. My friend was telling about a story of her new job as a Freewheelin' porcupineologist. After a nice dinner, we decided to go to watch the new thriller: The Attack of the James Franco-ing monkeys. My friend was feeling sad while I was feeling Muschamp'd. After the movie, we decided to go home. We had a great time! 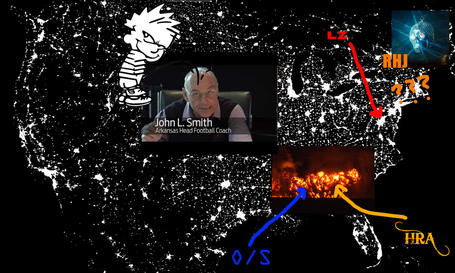 Let this be your weekend reminder, we're gonna build something this fall...unless of course you're an Arkansas fan. Woah boy.

Also, if you need to know which college football games are on your TeeVee this weekend, this is where you'll find out. Godspeed, EDSBSkateers.