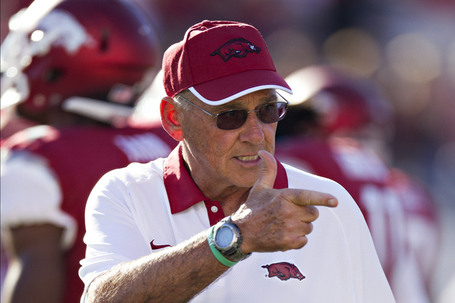 BANG! I'm shooting this gun why aren't you people all dying dammit--

A. John L. Smith has an assistant enter the locker room. "I'm sorry, Coach didn't make it. He's gone." A hush falls over the room. The assistant, reading from a note written in what is clearly John L. Smith's handwriting, insists they should continue on with the game, because that's what John L. would want. After an inspired first half, Arkansas is only behind 17-3. The team enters the locker room and sits down for halftime notes. John L Smith jumps from a locker. "Just like you guys, I'm still alive!" The team falls silent again. Arkansas retakes the field and loses by forty.

B. "Men, this isn't a great situation. But a lot of great opportunities are born from not-great situations. I want to tell you about a woman. For her, the winds are blowing every morning."

"Yes, it wouldn't be right without her hair. Every morning she gets up early just to do her makeup, okay?"

"She's never had her makeup, coach."

D. Plays 2006 Notre Dame/Michigan State for team, but runs it backward because "If we do it like that, we can't lose." Arkansas turns ball over 17 times attempting to snap from quarterback to center, loses by forty.

E. John L. Smith has his team eat "a rare mold that grows on other molds" because "Those who survive will be champions." It just turns out to be marzipan Smith rolled in some food coloring and sprinkles, but eight are hospitalized anyway. Arkansas loses by forty.

F. Has the team huff CO2 instead of NO2 as a bonding exercise. When they realize it after multiple guys lose consciousness, he tries to hype them up by convincing them the game is going to be played on the surface of Mars and this is just practice. Arkansas loses by forty.

G. He reminds the team what they're really playing for here. "What's that, coach?" asks a player. Smith smiles. "Exactly! Let's go." Arkansas loses by forty.