OUR OVERSEAS CORRESPONDENT: PRESEASON IN THAILAND

Share All sharing options for: OUR OVERSEAS CORRESPONDENT: PRESEASON IN THAILAND

It was two weeks before the college football season started and I just wasn’t ready. The brutal, smoggy Shanghai summer (think Atlanta at its worst, but all the while you’re sucking from a Ford Excursion’s tailpipe) taken its toll on me and I needed to get my head straight.

I needed to go to Thailand. Everyone said that’s a place you go and you never come back. Well, you forget things over there. One minute you’re sitting at a bar having cold drinks with a tattooed Thai chick sitting in your lap, the next thing you know you look at your watch and realize your flight home just left… 3 months ago. You forget things. 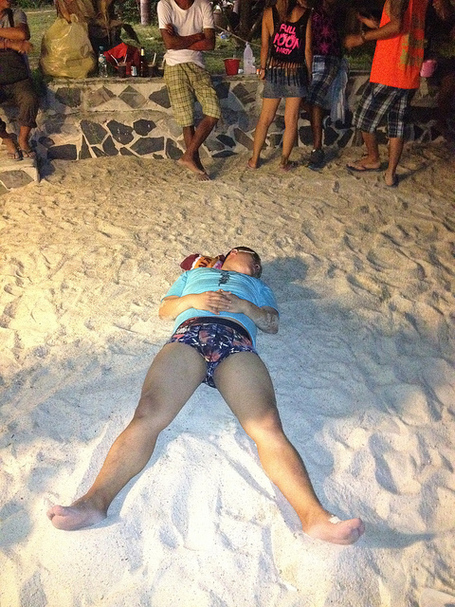 The other expats were all so loud, so drunk, so Australian. And many of these Aussies had tattoos on their arms that seemed to magically repel shirt sleeves. I saw no less than 4 "MADE IN AUSTRALIA" tats. I can’t blame em, in Thailand you forget things.

After a few days in Bangkok, I flew south to Ko Phangnan, home of the Full Moon Party. There’s a place I could really get right with the world. I took a lot of voice notes on my phone in the midst of the chaos. A mantra I repeated keeps popping up, yet I had no idea where it came from. In Thailand you forget things.

Switching tenses here, so I’m in the moment. I go to the Full Moon Party – it’s the biggest, drunkest, craziest party in the world that’s not a tailgate. 10,000-30,000 tourists crowding a beach listening to techno and just getting buckwild. The party is already raging as the boat from my hotel pulls up to Haad Rin. There are bonfires, DJ booths, flaming jump ropes, snacks. (Hey, you’ve gotta have snacks). We cruise up to this scene and thoughts of the Normandy float in my head. We’re approaching a dangerous, occupied beachhead. Not everybody is going to make it back. And there’s a lot of fucking Germans.

We disembark and party for hours. Late into the night, my friends convince me to try a magic mushroom shake while we’re there. So I take one… nothing. Wait a while then take another one, nothing. I’m a giant human being, so maybe it takes a few to really kick in, and I grab two more and head to the beach. Oh calamity. I knew something was wrong when the techno music started to sound good. And I knew something was VERY WRONG when the music started to taste good. I had to get out of there and away from that salty ass trance mix.

I’m on the taxi back to my hotel and everything is fine as long as I focus on the passing island to the left side of the boat, and not to the right at the edge of the water disappearing into the earth’s horizon. If I stare to the right, we’ll fall off the edge. And if we fall off, the turtle that holds up the world will eat us. Everybody knows that.

We pull up to the hotel and approach the beach so fast I’m afraid we’re going to crash into it and kill all the sand. I got really concerned for sand and nature in general. Then I realize OH SHIT I have to get my room key. I have to interact with people now.

I go to the reception desk, my pupils as big as saucers.

"I need to get in my room." I frantically explain. "I wanna be in my room and my room – it wants me in there. There’s that energy you know? And you, you’re the keymaster. You can make it happen"

That’s when I realize if you stay at a nice enough resort, you can be as fucked up as you want and the staff just pretends you’re fine. It’s the same reason that Lindsay Lohan’s high-paid entourage covers up for her week-long coke bender by telling the press she can’t make the interview because she’s got…uh… exhaustion.

So the guy behind the desk, he doesn’t even bat an eye.

And then the lady behind the desk brings me a cold towel and mocks patting her head with it. "Sawatdii kaa. For your… exhaustion" 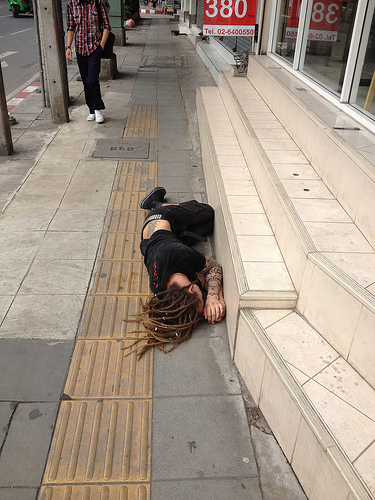 Okay now I could be alone with just myself and the energy shadow that was following me and also the palm trees who were checking on me. I needed to be in a safe place, so I get into the pool and duckwalk around, all but the top of my head submerged, for about 3 hours. I’m giving the palm trees a thumbs up to let them know I’m fine when a plane flies overhead. It’s the same plane I was on two days ago coming here. I’m on the plane, but I’m also here! YES IT’S ALL HAPPENING NOW! EVERYTHING’S COMING TOGETHER AS ONE. I need to tell people about this. I have to tell people about this. But I don’t want to get out of this pool.

I need an underwater phone.

You may follow Chili on Twitter at @dannyfordisgod. He is still in need of an underwater phone.