Share All sharing options for: JIM GROBE REMAINS THE NUMBER ONE STUNNA

We did a quick commentary we're sure Cal fans will completely misunderstand over at the mothership. It's not that Jeff Tedford is not an excellent coach, and certainly not one without his frustrations. We're simply saying that from a job perspective, it is really hard to beat being Jeff Tedford at Cal right now, scoreboard be damned, because you're still at Cal, and you're still one of the few people to ever make it work consistently for football there.

Sure, you might say you want to coach at Alabama or Texas, but you don't mean it. You don't want the burning gaze of fan-Sauron on you at all times. You don't want people coming up to you at the grocery store and asking if you are going to beat [RIVAL] this year. Bricks through windows are a form of precipitation for coaches in places like these.

You want better weather than that. You want some place where you can be Tedford: living in an awesome place, getting a really good salary, and then winning consistently while not being overly spectacular and raising the expectations you can keep manageably low year in and year out. Just under the radar and over the walls of the highest tax bracket is where you want to dwell, no higher, and certainly no lower.

Tedford would almost be the master at this were it not for two men. The first is Kirk Ferentz, he of the $3.785 million salary at Iowa. The true master, though? 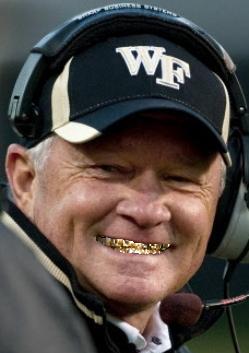 Your Jim is bad, your Jim is hood, Wake Forest. Your Jim does stuff that our Jim wishes he could, like pulling down $2.25 million a year with a 70-67 record at a basketball school happy with the occasional breakout year and public humiliation of Florida State.

Oh, is that game this weekend? Funny, Jim was just thinking about that lake house. The dock looks awful bare with just one boat there. Lonely, even. Get his agent on the line, cause college football's quietest Big Tymer has the ten, but is feelin' 20 karats in his grill--all platinum, this time.