WE HOPE YOU DANCE: THE MOVEMENT BEGINS

Share All sharing options for: WE HOPE YOU DANCE: THE MOVEMENT BEGINS 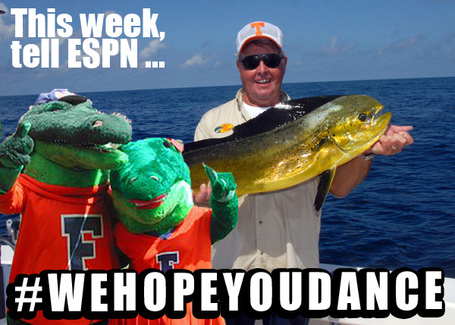 Hate Week really hasn't gotten started, and probably won't because of one important issue clouding our usually blood-red vision this week. We'd like to address that issue with you, reader, and ask your help.

You cannot have an enemy without respect. For instance, we have always hated Tennessee more than opponents like Florida State because, deep inside the abandoned, hobo-infested K-Mart we call a heart, we respect them. Tennessee fans inherit their fandom, passing it down generation to generation like a prized brooch, bible or genetic disease. They cultivate with a grudging, calculated, one might even say plodding diligence, simmering their love like moonshine or meth on the cold, thorny hillsides of East Tennessee.

When it blows up (and it does, from time to time), the burns are hushed up, and the hurt nursed privately and stoically with bottles of brown liquor and grumpy clicks of the trackpad.

But you have to respect it, because like National Socialism, it is decidedly an ethos. Unlike being a Florida State fan, you don't just catch it from brushing your lips on a drinking fountain or kissing an unclean person in a tent. No, you earn Tennessee fandom, and rep it every day in your conversion vans, Pilot gas stations, and substandard public schools, Tennessee fans. Even as a hated rival we respect the commitment.

That commitment is precisely what you look for in someone to represent the school at all levels, especially the role of celebrity picker at College Gameday. One man embodies that commitment more than any other.

That man: Bill Dance, the King of Bass Fishing and the man who has repped the Power T to more eyeballs than any man alive.

Falling off of riverbanks, catching snakes with his face, stepping blindly off docks or foot-first into hooks, Bill Dance has done it all wearing one thing: his indestructible, sparkling white Tennessee baseball cap. Sure, he and the hat have had hard times. It could not protect him from the end of the Phillip Fulmer era, the slow decline that left him and other Tennessee fans sliding hopelessly down a muddy slope into a rocky lakebed. It came off when he stood up directly into the path of a swinging camera boom that brought him low like the sudden departure of Lane Kiffin.

But what did Bill Dance do? He picked it up and put it back on his head, both because he's not as flush with the hair game as he used to be, and also because Bill Dance cannot help but rep the University of Tennessee wherever he casts his double-tied hammered nickel plated Colorado blade. 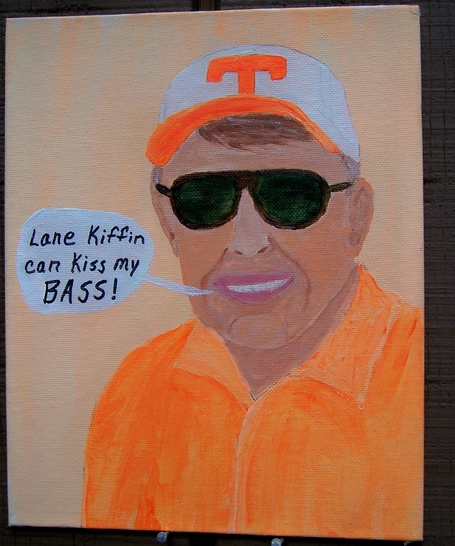 We know you will make a mistake, Gameday. You'll probably pick that malnourished halfling that fell out of Jimmy Buffett's toothbrush like a piece of overcooked midget swordfish, Kenny Chesney. You'll do this because you think Kenny Chesney is a "Tennessee fan" who lives and dies with the team, who suffers when they lose, who wakes up like the true Tennessee fans we know who after a loss roll over in their dark Tennessean homes, stumble to the advil, and with a breath and a painful stab of the memory utter, "Goddamn you, Erik Ainge" every other morning of their lives.

You would be wrong, because that tiny blandishment factory of a musician is in fact a trampy whore. We're sorry if this disturbs you, but we feel you are owed the truth. 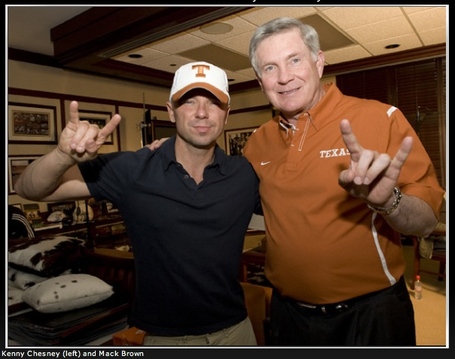 In conclusion, let us hope that you never lose your sense of wonder, Gameday. Let's hope that you acknowledge that what makes your show special is not just the talent, but the distance from Bristol and proximity to the places that make this sport the unique bouillabaisse of Americana that it still is.

Let's hope that though you've gotten your fill, you still keep that hunger, and that if that hunger needs fish, it comes off the line of a certain man cruising down the Tennessee River. We can see him now: orange "T" on the hat, spinning reel whining, trolling motor falling off the side because he has forgotten to secure it, most likely in a comical fashion involving several "dadgummits" in a row.

He falls off the boat, and into the hearts of viewers everywhere as this week's Gameday celebrity picker. We hope you make the only call you should make here, Gameday, and honor the man who's sent so many fish to to their doom that "The white light" in underwater circles is simply referred to as "the orange 'T'." You don't know this because you don't speak fish, but he does. Put the man on and he'll teach you himself, and possibly mangle his hand in a ceiling fan for your entertainment.

In short: we hope you Dance, Gameday.