Share All sharing options for: HOMERIC TENDENCIES: FLORIDA VERSUS TAMU

1. Hey, Will Muschamp football. There are times we hate you. One of those times came in the first half against Texas A&M when Johnny Manziel, fresh from running roughshod through our defense like the second coming of Pat White, scored, sprang to his feet, and shot bolts of pure adrenaline from his fingertips into the Aggie Crowd. He looked happy. He looked glad to be there. He looked, for lack of a better word, like he was having fun.

2. It was fun, the opposite of whatever Florida football has been since 2009 or so, and a word that has at no time been associated with Will Muschamp's tenure as coach. This is not football for him: this is rehabbing a patient, and at this stage in the patient's treatment they can, for the first time since their accident, successfully use a spoon, and possibly a spork. The fork is a bit much right now, and no one wants to see anyone lose an eye.

3. It looked like drudgery, and at times painful, half-hearted drudgery just like last year's Alabama game, and the LSU game, and the Florida State game, and even the Bowling Green game to open the 2012 season. The Aggies spread the field, ran through the film-blind Florida defense with ease, and it suddenly looked like Florida was on the butt-end of Kevin Sumlin morphing into a jackbooted Chip Kelly with a rabid collie he was not, repeat, NOT going to put on a leash for your safety.

4. On that, before it turns bad: you still may have. Kevin Sumlin came out with a freshman quarterback in his first game and turned him loose in the most ingenious way possible. With a freshman quarterback has rabbit in his heels, rather than turn him into Case Keenum overnight, Sumlin turned instinct into asset and just let the rabbit run. Without film prep, it turns out the Florida defense is really bad at catching rabbits. Redouble Muck City recruiting efforts immediately. 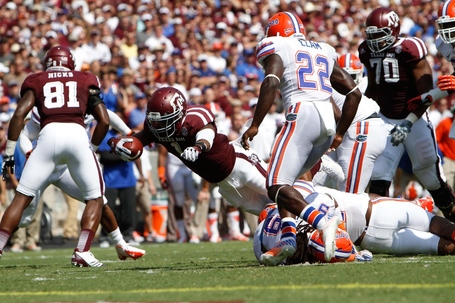 5. Texas A&M also clearly wanted to tear someone's head off in the first half, at least. Let that be remembered, along with the defensive lines and offensive lines literally tossing Florida's beef stocks around. At one point a Florida offensive lineman--we think it was poor freshman D.J. Humphries--was literally tossed out of the way on a pass play. D.J. Humphries is a huge young man, and the level of adrenaline it took to do this lifts buses off trapped schoolchildren.

6. At halftime, Will Muschamp football was down at the half, a situation with no verifiable data supporting a shred of optimism.

7. Then...that happened, that weird word escaping any description of Florida football for years now: control. The Aggies offense moved just as much, but it was motion frittered away in the pocket, or scrambling hopelessly out of it and into the arms of defenders. It looked like a plan, a pattern of eleven things all doing what it was supposed to do and in sequence. It wasn't earth-shattering, Alabama-level constriction, but it said the only word defenses are supposed to say: no. For a team in rehab in every sense, one word is better than the confused silence.

8. Did it remind you of the 2006 Auburn game when, after a half of running wild on Muschamp's Auburn defense, the Florida offense just flatlined in the second half? Muschamp's halftime adjustments were devastating for the Aggies, and what he could do with actual film on an opponent and this defense is worthy of some genuine enthusiasm. We are saying this without irony or sarcasm. We're sort of "excited" about this, and are practicing human emotions in the mirror as we speak to express these enthusiasms.

9. And that other thing happened, the part where the Aggie defense--the half of the ball that tried to kill Florida for the majority of the game, and not just two quarters--sacked Jeff Driskel eight times in a loss. Some new rubicon in productive offensive futility has been crossed when you can give up eight sacks in a game and still walk away with a victory and a quarterback who, um, walks away.

10. That same offense looked eight percent less bad than it did against Bowling Green, making it merely bad now, and edging toward slightly defective. This is ugly power football on crutches, but a patient on crutches with the right attitude and understanding of its limitations can cave in a kneecap if they swing at just the right point on the opponent. Mike Gillislee's tightrope run for the clinching touchdown was jarring not only because it looked like the kind of difficult athletic move a non-athlete would tear several ligaments even attempting, but also because it was so goddamn beautiful surrounded by the grinding mess of the rest of the offense.

11. Gillislee only strained his groin, because he's an athlete, and because nothing will ever be easy for this team because they're in rehab, and relapse is part of the cycle.

12. We don't like Will Muschamp Football as a brand. It is, for the moment, the stray dog with worms, the patient on the parallel bars trying to take a step, the crashed and sober alcoholic attempting to crawl out of bed without a stop by the liquor cabinet. We hate the insistence on winning games in the fourth quarter because, as most Florida fans spoiled by Urban Meyer and Steve Spurrier will happily admit, the best way to win games is in the first quarter, and the fourth is for giggling and having one ill-advised drink too many. it would be really lovely to have that.

13. This team will not do that because this team cannot do that. There are 12 games in a season, each representing about 8.3 percent of a team's total possibility. Florida did something it had no hope statistically of doing: coming back with the aforementioned Will Muschamp Football on the road down at halftime. They did so despite almost getting the quarterback sent to the College Station jail for loitering and making only one real play downfield in the passing game.

14. They did this despite playing the kind of game that can drive a fan to the point of facing away from the game and reading a book to their child to remind you of the things that are less frustrating than football. A two-and-a-half year old is at this point less frustrating than Florida football, but there are similarities. You leave for a week, and come back and find an entirely new child who, by percentages, is more of a person than they were when you left.

15. That number can't be 8.3%, exactly, but if it were? After twelve weeks you'd have something close to a grown-ass man. Flawed, in need of improvement, yes: but still 100% away from where it was at the start. It's not going to happen like that. Life does not work like that, especially if you have to go to Tennessee to face the best Vols team in years on the road. Like all mornings, it is a start, albeit an ugly one, and the hardest part of all until the next one. Good morning nonetheless.