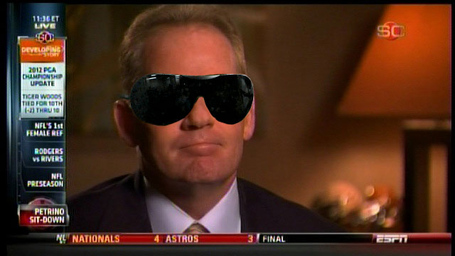 For once, we wish a coach coming off a scandal would admit nothing and concede even less.

"Do you feel bad about what you did, Coach?"

"Only in that it cost me a lot of money. A tremendous amount of money."

"Do you feel any regret over what you did?"

"See: assloads of money. I also lost a good bike and an attractive mistress. Her pancakes! Oh, they were peerless. I mean that literally, not metaphorically. She made some great pancakes. I also enjoyed having sex with her."

"Not my problem no matter the meaning. I don't cook or have sex with dudes. Especially you, Joe Schad. Especially rubberfaced, ugly, sadassed you."

Bobby Petrino's not doing this for you, though. He's doing it for the future employers of the world, the people who will hand him a new handset and take the accepted costs of employing him: the threat of him being hired away and the constant unease of having him as your head coach, and him being a dick. In return, you get excellent football.

It's always a tradeoff. For example, employ Jim Mora, and he may say things like this.

Mora, discussing recruiting on the Roger Lodge radio show, said he makes a point to tell parents how safe it is at UCLA, noting, "We don’t have murders a block from our campus."

Mora's mouth has run several yard markers ahead of his brain before, so it's not like this is a new thing, but the timing is particularly bad if you take the recent murders of two Chinese graduate students near the USC campus into account. Mora swears he was not referring to USC, and he was referring to USC, but here's a dick trying to non-apologize anyway.

"If anybody, whether USC or Cal State San Bernardino, is offended by the statement, then that’s their insecurity, not mine."

Don't do this. Instead, just come out and say "I'm a football coach, and I am not good at talking. Additionally, I am kind of a dick and not very sensitive toward other people. I may need to carry a children's feeling chart with me every day just to relate to other human beings."

Fellow person-challenged occasional dick-coach-human Lane Kiffin barely talks at all any more. He now probably answers questions by holding up the feelings chart and pointing towards it, and it's all worked out beautifully for him so far at USC. People are even writing redemption stories about him like he's even changed anything he does at Besides moving to the very different environment of L.A. and talking less, he really hasn't changed anything besides his win percentage. However, like most things in recent L.A. college football history, this is probably something UCLA will do ten years after USC did it. (And most likely too late.*)

*See: hiring an ex-NFL head coach and defensive coordinator on a lark to see if they can replicate the Pete Carroll experiment, because history always repeats itself exactly in every case.