Share All sharing options for: NEVER FORGET: EVERYWHERE IS TERRIBLE

You might have seen this little to-do pop up in your feed yesterday, if we are Twitterpals, but if we may take a quick detour on a slow afternoon, let us address the issue of the Writer Who Dared Disparage Akron, Ohio. We have never met or spoken with Stephanie Wei, and did not contact her for the purposes of this post. But we do know about comments like this, and what happens when they get latched onto by locals (Isn’t that right, Memphis?): 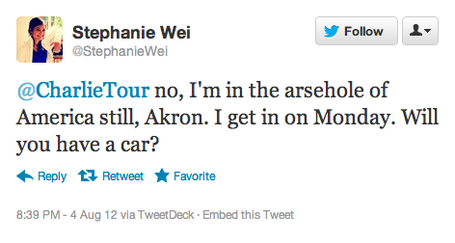 That Akron is gross is not a new sentiment. It’s not even a new sentiment this week. Our own personal animosity stems from a time we bought a "FEAR THE ROO" Akron football t-shirt for a sister’s Christmas stocking stuffer and got put on the Akron football booster spambot mailing list from hell, for reasons that still surpass our understanding. We unsubscribed from this list upwards of a dozen times. We blocked the email address, only to receive new emails from a different address on an entirely new list. We began to email increasingly nonsensical threats to the list operators, in the hopes of catching somebody’s attention, all to no avail. This went on for some months, until we finally installed a Gmail filter sending everything with "ZIPS" in the subject line straight to the trash, which is why we thought the hiring of Terry Bowden was an elaborate Twitter prank for like a solid week.

Our point is this: Everybody has a story like this about somewhere, and that like Fearless Leader wrote in January, "People generally have a very difficult time turning down the bait of someone telling them the place they live, the very earth they tread each day and may one day be interred within, is not the best place in the world."

Our favorite variation of this occurs with great frequency in the SEC, where Alabama and Mississippi residents or Tennessee and Kentucky residents argue over whose state is backwards-er, like there would be any discernible difference between the two to intergalactic travelers who landed in this great nation of ours and crossed state borders without the ability to read road signs. Our second favorite is the one-two combo move of "HERE IS EVERYTHING MAJESTIC ABOUT THIS PLACE, YOU WOULD REALLY LIKE IT IF YOU GOT TO KNOW IT" followed immediately by "BUT NEVER EVER COME HERE OR WE WILL SET YOU ON FIRE." These frequently invoke the names of celebrities. We once delivered a disparaging remark only to be informed by an extremely distraught reader that "Kevin Costner built a home here where he can come and take advantage of all the great golf an outdoor activities like hunting and fishing." That’s great for the Postman and all, but doesn’t move our needle any further towards wanting to spend Christmas in Shreveport.

Dyer executes this with great enthusiasm, name-dropping Tiger Woods and Jim Nantz (whether any of us should seek to emulate Tiger Woods and Jim Nantz in our daily lives must regretfully remain, for now, an unexplored avenue of discussion) in extolling the virtues of Akron, tut-tutting Wei’s "mouth," and then wrapping up his breezy epistle with: "If you want to tell Stephanie Wei where to go, her Twitter tag is: @StephanieWei." How very genteel. (Dyer’s phone number is listed directly below that line, a juxtaposition we thoroughly enjoyed.) This is a column that deserved the headline, "SOMEBODY OUT THERE DOES NOT CARE FOR AKRON; LET’S GET HER."

We could singlehandedly resurrect the newspaper industry if we could track down each and every instance of this and put local scribes to work eviscerating the offending parties. Circulation levels would absolutely skyrocket; if there’s one thing the American public is truly united in loving, it’s yelling at strangers on the internet. In fact, we’re going to make that our next offseason goal. Starting in February, we will hire ourselves out as professional scolders of public figures who have offended your personal sensibilities. Is this a great country or what?

Anyway, this has dragged on far past its intended stopping point. Stephanie, if you’re ever where we live (which we cannot stand most days) on your way to Augusta or something (where we have family, who don’t like it there either), give us a holler and let us show you around south Georgia. It’s a terrible place.

*And in doing so do Bob Dyer a favor, because he’s at that keyboard to sell papers and/or pageviews, and by gum, he has succeeded. Again, this sounds like a fun job, which is why we want to try it out ourselves.