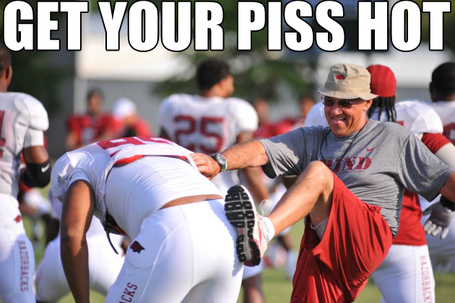 TANNER MCEVOY IS SEEKING HIS GOOD TIMES ELSEWHERE. Just after Steve Spurrier dismissed talk of any serious punishment for his "drinking after consuming" charge, it turns out that quarterback Tanner McEvoy will not be continuing his football career or education with the University of South Carolina. The decision has as much to do with the depth chart as the arrest, but the whole thing feels like a bad fit resolving itself via transfer more than anything else.

THE SOURCE HERE SEEMS COMPLETELY DEVOID OF CREDIBILITY. If you never thought we would ever appear as anything but an example of the negative in society in a Dennis Dodd column, THE CIRCLE HAS NOW BEEN BROKEN. It's mostly about the Pac-12's branding and where they're going with their weirdass, mind-bogglingly ambitious media deal, but there is also the detail about us going to the first night of the Pac-12 network, which should be very interesting if only for the Ronnie Lott stories. (We may look Ronnie Lott in the eye! And not die!) For a head start on the Pac-12's branding, this photo should explain where they're going, or at least make you want to put on a shiny helmet and go surfing.

THIS THING IS LIKE THIS THING. Game of Thrones/SEC edition, because sure, why not.

DREAM A DREAM FOR US, RUTGERS. Oh man message boards are just the best.

WAVING AROUND A PELLET GUN IN A HEAVILY ARMED STATE IS JUST NOT A VERY GOOD IDEA. CU players driving around Boulder made the mistake of waving a pellet gun around at each other in their cars, and did so in cuddly, hypervigilant Boulder, and that's how you get the unfortunate sight of two cars full of CU players pulled over by cops with their guns out. The situation was defused without any charges being filed, though head coach Jon Embree did suspend two wide receivers for the incident, including DeVaughn Thornton, who did not handle the arrest as well as one could.

Officers said Thornton told officers, "Go ahead! Shoot me, mother (expletive)," "I can go wherever the (expletive) I want," and, "This is Boulder and you have your guns out?"

DON'T EVER ASK A COP TO SHOOT YOU. This may seem like a commonsensical rule, but they're really happy to do it if you ask enough. There will be no charges filed in the incident. Don't ask people to shoot you, especially if William Burroughs or Fred Lane's wife is holding the gun.

YOUR PAIN, GIRL: Other Texas fans feel it.

EVERYONE LIKES EVERYONE THIS YEAR. Well, isn't that nice, Florida coaches. Who's gone? Ah, that's right. No one. (Via Alligator Army)

THE NCAA CONTINUES TO AMUSE AND DELIGHT JUDGES EVERYWHERE. The judge's response to the NCAA refusing to divulge member profits from licensing deals is essentially "LOL NOPE," which in five years will be a legitimate legal term.

ETC: The bartender hates you when you order it, and we sympathize. Matthias Steiner, you went for it.