Share All sharing options for: FULMER CUPDATE: THE HOME STRETCH

The Fulmer Cupdate is brought to you by Boardmaster Brian, who this week is parlaying his Reggie Nelson-esque talents into a gig conducting several regional orchestras at once. Updates and notes follow. 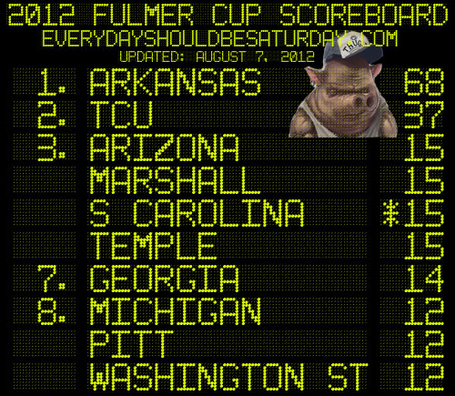 WE DID IIIIIIIIIIIIIIIIIT. The ticker for total points hit 239 points this week, easily outstripping the 230 point record from the 2011 season. This season is officially the most felonious/misdemeanorish of all, and for that we can only thank those responsible: law enforcement, the bored athletes of college football, and the decision-making impairment only the potent combination of testosterone and alcohol can induce. These are monumental times. Do not let them pass without notice.

Arkansas remains far ahead by a margin so large that not even John L. Smith can blow it.

IOWA: AIRBHG strikes again, and again, and when you think he has gone and taken his cursing stick somewhere else, he returns and resumes walloping. This time the target is De'Andre Johnson, who in three days ran into the loving arms of the police twice: once for the fantastic "maintaining a disorderly house" when a party got too loud, and then two days later for doing 60 in a 25 and not stopping for the cops.

All three charges are misdemeanors, but let's throw a bonus point in to recognize Johnson's unique burst and production and call it four points for the Iowa Hawkeyes in the Fulmer Cup. AIRBHG is everywhere, but mostly Iowa City, really.

GEORGIA: Chase Vasser's inherent Dawg-ness is already so far off the charts all metrics surrender: floppy-haired, named "Chase," probably loves the Masters, and plays in a backup role for UGA before an inevitable career in something requiring him to play a lot of mid-week golf. He couldn't even get an non-UGAish Fulmer Cup crime, since getting a DUI in Buckhead driving on Piedmont Road is pretty much the most "Chase Vasser" arrest ever.

That's two points for UGA in the Fulmer Cup, and we look forward to Chase Vasser's impending marriage to a Cobb County girl with nuke-white teeth and an SUV blasting some Kenny Chesney 24/7.

OHIO STATE: One charge of disorderly conduct for Bri'onte Dunn gets tOSU one point in the Fulmer Cup for charges which initially could have been a bit worse. And look, not a Huntley Johnson in sight!

SOUTH CAROLINA: Tanner McEvoy's tipsy driving did not earn him a suspension from Steve Spurrier, but it did get the Gamecocks three points in the Fulmer Cup. As Stephen Garcia knows, McEvoy only has somewhere between five and fifteen more chances, so use them carefully, son.