THE TIME FLORIDA HAD THEIR FOOTBALL COACH ARRESTED IN CUBA

Share All sharing options for: THE TIME FLORIDA HAD THEIR FOOTBALL COACH ARRESTED IN CUBA 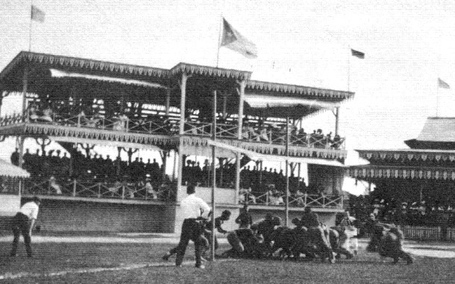 Florida's football coaches have accomplished so much through the years. Charley Pell figured out how to turn two hours' work at a chicken plant into 40 hours of actual labor. Steve Spurrier turned a "Noah Brindise" into a half a quarterback. Ray Graves invented the novel "punt on third down to piss off your offense," Ron Zook mastered the art of the perfect snack machine headbutt, and Galen Hall was like a dormitory named Charley Pell. Urban Meyer won two national titles, and then let Temple's head coach take a spin at the wheel while he quietly became the world's highest ranked Starcraft player.

It's been a serious run of real accomplishment, obviously, but not one of these men accomplished what George E. Pyle did in 1912 as the coach of the Florida Gators' football team:

The argument led to the Florida coach refusing to continue and the referee responded by awarding the game to the CAC by forfeit. The Cuban police arrest Pyle for violating a law against suspending a ticketed sporting event without finishing the it or refunding the spectators. Arguing with referees was not new to the game, but it rarely resulted a head coach's arrest.

That's right: OUR FOOTBALL COACH GOT ARRESTED IN CUBA. Not that football coaches haven't been arrested in Cuba before, but few have had the good luck to flee via steamship. Jimmy Johnson bought his way out with smiles and 200 rolls of two-ply toilet paper, while Schnellenberger, after three marriages and four children conceived, simply dove into the waters of the Florida Strait and let his friends the dolphins carry him home atop their domed, smiling heads. (HT: Kleph)