SERIOUSLY, BEST OF LUCK, JUSTIN BROWN. The latest transfer from Penn State received the usual good tidings from his fans in State College on his way out. 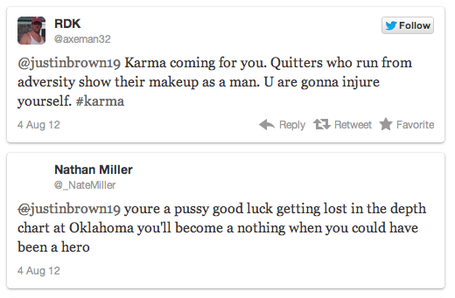 Brown joins a wide receiving corps in desperate need of his services at Oklahoma, and steps right onto the roster of a national title contender with a quarterback more than capable of inflating his stats to attractive, NFL scout-drawing numbers. He also leaves behind teammates who wished him well, and at least five or six fans who need to lose their human being licenses. (Just for that, enjoy the story of how close your program came to absolute extinction, Penn State.)

PREPARE FOR HEAVY LULZ IN THE DIRECTION OF JOHN SWOFFORD. If the Big East's tv deal exceeds the ACC's in value, the floor is there for rolling and laughing, everyone, and you should use it in the case of a LOL'in emergency.

SPURRIER WILL GIVE A QUARTERBACK ONLY LIKE FIVE, SIX, OR POSSIBLY SEVEN CHANCES. To be fair, Steve Spurrier does have a point in not suspending backup QB Tanner McEvoy:

USC coach Steve Spurrier said he won’t suspend McEvoy for any games. "You want him suspended for having a beer and he’s underage?" Spurrier said. "How many football players would be playing if they had a beer and they were underage?"

Almost all of them, and certainly all of the fun ones, Steve.

UCLA IS RIGHT ON SCHEDULE. Jim Mora is currently talking to Oscar Pistorius' engineers, and with good reason.

BAYLOR WILL WEAR BLACK BECAUSE IT'S ALWAYS FORMAL NIGHT IN WACO. Dancing is now permitted, and that's good because Nick Florence will have to do some dramatic square dancing in the pocket this year to avoid the shots Robert Griffin III dodged so effortlessly in 2011. (BREAKING NEWS TO NATIONAL MEDIA: the phrase "Nick Florence is no Robert Griffin III" is already trademarked and embargoed thanks to the EDSBS Patent Troll Consortium. The EDSBS Patent Troll Consortium: attempting to kill announcing cliches since 2011.)

NEVER MIND THEM, JUST GETTING ACCESS AND BEING ALL JOURNALISTIC-ISH. Just House of Sparky getting interviews with ASU players like running back D.J. Foster, that's all. ASU has been very open with press access, and that might surprise you if you don't remember that Todd Graham knows just how bad his reputation is in the media. (He does, and thus the access.)

OH, JUST MORE BLOG-BALLIN'. Eleven Warriors reviews Urban Meyer's offensive background with input from, um, Urban Meyer, current head coach at Ohio State. The amount of influence Scott Linehan and John L. Smith had on his offense is both interesting and hilarious, but then again, there really are only four plays in football.

/THROWS AIR FORCE BCS TITLE BET SLIP OUT THE WINDOW. Well, it was a sweet dream while it lasted, Air Force BCS bet.

BO, MEET BEAR, BEAR, MEET BO. Oh, this is some classy business, MGoBorg, though nothing equals the graphical glory of this Tom Harmon card, and nothing ever will.