THE STUPIDEST STATE ACCUSATION IS GETTING HARDER TO DODGE. Dammit, old people from the Northeast. You ruin everything, including the proper tint of the Sunshine State in important and scientific national polls. 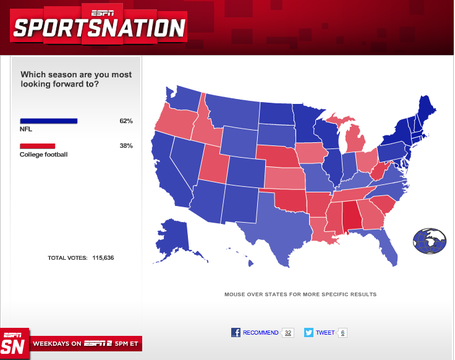 (Via) Texas, Dan Jenkins' mythical crib of college football, is also shamefully lavender. You belong in the SEC, state of Oregon, and you know this. FOOTBALL STARTS TOMORROW. THIS IS ALL REAL. TAKE YOUR PANTS OFF AND BURN THEM THEY ARE NO LONGER NECESSARY.

OH MY GOD HE DID IT. Bill C finishes his long march through every team in college football preview with Bama, who Bill says will be good and perfect forever. Also, this:

This is Alabama. Success is winning a national title. No need to overthink this one.

So remember that 10-2 would be an utter failure hahahahaaha you already really think that, Alabama fan. No need for the reminders! Acceptance really is the only strategy the rest of us have until Nick Saban inevitably returns to the NFL to go .500 and yell at underlings who look him in the eye.*

*He really did and still does this. A grown man. You don't make $4 million a year for being normal or sane.

OH LOGAN THOMAS. It's going to be so much fun watching VT use him as a cudgel this year along with the usual VT hammerback attack, so really the Hokie offense is just going to be the Hephaestusbone all year long: two hammers, a lot of fire, and still sort of crippled because Stinespring's still at the helm.

MONTEE BALL IS NOW SAFE. As if he weren't before with the Wisconsin offensive line ready to sit on any threat that gets near him, but now with the three guys who attacked him in custody, he's like, ultra-Madison safe. (That is, still vulnerable to beer and weird hippie ladies' charms.)

IT WILL REAPPEAR. Most likely reassembled inside Jim Mora's bedroom, because Lane Kiffin does not go halfway with his prankdom

YOU HAD US AT "LET ME TELL YOU ABOUT THE TIME I SHIT MY PANTS." Great moments in tailgating from the finest damn Iowa State blog in the world.

THE OUTSIDE WORLD DISCOVERS THE TASTELESS WORLD OF COLLEGE T-SHIRTS. Hahaha, Jezebel fell into a puddle of college football.

ETC: It's not the greatest sports movie ever, but it does have a very strong resume including Charles Barkley talking about that time he may or may not have had sex with Madonna. Really, Jason and ourselves can really do this.