WEEK 1 PREVIEW: THE BUFFET IS OPEN

Share All sharing options for: WEEK 1 PREVIEW: THE BUFFET IS OPEN 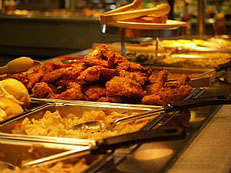 Ryan's buffet photo courtesy tasteofknoxville.com. Couldn't make it up if I tried, folks.

College football is nearly upon us, and after perusing the extensive list of games that will be available for your viewing delectation on opening weekend, you're probably like a kid in a candy store. Actually, you're probably more like a kid at a Ryan's buffet, because with the exceptions of the neutral-site Chick-fil-A Kickoff and Cowboys Classic games, the pickin's on opening weekend are pretty much crap — and you're still gonna cram as much of it into your face as you possibly can. Fortunately, we're here to help you find the breaded, deep-fried good stuff and let you know when the waitress is going to be bringing a fresh batch of sticky buns. (All game times EDT.)

What you’ll be watching: South Carolina at Vanderbilt (ESPN, 7 p.m.)

It’s the SEC, and one of these teams is ranked in the top 10, but the first SEC Thursday-nighter of the season is invariably a dog-ugly affair involving either a non-competitive beatdown or a sub-NFL-preseason-caliber slog between two teams whose offenses haven’t yet learned to stop tripping over their own shadows. Best guess is this one leans toward the latter; spice up your evening by placing prop bets on whether Steve Spurrier’s visor throws will exceed his team’s points total.

What you should be watching instead: Texas A&M vs. Louisiana Tech at Shreveport (ESPNU, 7:30 p.m.)

Only you can’t, because stupid sexy Hurricane Isaac had to come in and ruin everything. So go ahead and sit through South Carolina-Vandy, but the real fireworks come immediately afterward with Washington State at BYU. Witness Dread Captain Mike Leach return to the high seas with a brand-new crew and a brand-new mission: invading and pillaging his alma mater.

Now that the Broncos have donkeybonked eight of their last nine BCS-conference opponents — and are on their way to becoming Big Sixers themselves — a Boise win in East Lansing wouldn’t be that much of a novelty. Neither would a Boise loss, as evidenced by Marc Dantonio looking wrist-slittingly miserable on the sideline regardless of the outcome.

What you should be watching instead: Tennessee vs. North Carolina State at Atlanta (ESPNU, 7:30 p.m.)

North Carolina State will score buckets on Tennessee’s defense despite Tom O’Brien’s best efforts to the contrary. Tyler Bray will throw touchdowns to approximately 47 different people — his own players, N.C. State’s players, officials, people in the stands. In contrast to the measured, conservative game planning on display in the Boise-Michigan State game, this will be a cavalcade of wacky shenanigans in which "Oh, yeah, I totally meant to do that" will be the theme of the evening.

What you’ll be watching: Ohio at Penn State (ESPN, noon)

If you’ve ever read the comic book Y: The Last Man or seen the Twilight Zone episode "Time Enough at Last," you’re familiar with the degree to which Bill O’Brien’s roster has become depleted up in State College — and you know Ohio (that’s Ohio U., as in the Bobcats, not Ohio Sate) could totally win this thing.

What you should be watching instead: No, you should totally be watching Ohio-Penn State, for that very reason. But don’t forget to set your alarm for Navy-Notre Dame, live from Dublin at 9 a.m. My parents were in Ireland for their 40th anniversary earlier this month, and my dad reported having oatmeal doused with Bailey’s and rum-soaked raisins for breakfast while he was there; the Irish go hard with the bottle, even in the mornings, so there’s no reason you shouldn’t start your day with a little Vitamin Booze yourself while this one’s going on. Make your face twice as red as Brian Kelly’s with half the work!

What you’ll be watching: Miami at Boston College/Southern Miss at Nebraska (ABC/ESPN2, 3:30 p.m.)

In 2003, either one of these games would’ve been pretty fun to watch. As it is, in 2012 your choice is between "probation-hobbled ex-superpower vs. poster child for teams that will launch their coaches into the sun at the earliest possible opportunity" or "regrouping mid-major vs. talented team with a quarterback who throws the ball like he’s the ‘Has this ever happened to you’ guy in a late-night infomercial."

What you should be watching instead: Iowa vs. Northern Illinois at Chicago (ESPNU, 3:30 p.m.)
The favorite punching bag of Angry Iowa Running Back-Hating God at the NFL stadium where offense goes to die? Do not be surprised if this game is still very competitive going into the fourth quarter, perhaps because each of Iowa’s remaining running backs have spontaneously combusted immediately upon taking the field.

What you’ll be watching: Alabama vs. Michigan at Arlington, Texas (ABC, 8 p.m.)

This battle of top-10 teams is the big headliner of the weekend, and yet we all know what’s going to happen: Alabama’s massive offensive line and plug-‘n’-play backfield will pound the rebuilt Michigan D-line into hummus in a businesslike fashion befitting the soulless corporate surroundings of the JerryDome.

What you should be watching instead: Auburn vs. Clemson at Atlanta (ESPN, 7 p.m.)

Gene Chizik. Dabo Swinney. Tajh Boyd. Kiehl Frazier. Brian VanGorder. Sammy Watk . . . heh-heh, whoops, sorry ‘bout that, Clemson fans. But even without Watkins, this is still the closest college football gets to "Circus of the Stars" in Week 1, with players attempting things they should not be doing, as directed by coaches who may or may not know where they are or why they’ve been put there. If Alabama-Michigan represents the boring, polished professionalism of Andy Griffith, then this game is the Barney Fife, all bug eyes, flop sweat and guns accidentally going off in their holsters.

This is the type of game that could only make it onto national TV in Week 1, when nearly all the traditional powers are warming up by kicking the crap out of patsy opponents and taking their lunch money. Seriously, your only other viewing options at this hour are Oklahoma-UTEP and Toledo-Arizona, two games that scream "I’M JUST SO GLAD TO HAVE FOOTBALL BACK I DON’T CARE WHICH TEAM IT IS. WHO’S PLAYING BETHUNE-COOKMAN?! IT MATTERS NOT! BRING THEM TO ME. BRING THEM ALL."

What you should be watching instead: Actually, it could be interesting seeing how the ASU Red Wolves fare in the head-coaching debut of evil offensive spell-casting goblin Gus Malzahn, but if you need to cleanse your palate of all that scoring, you can always flip over to Man City vs. Queens Park Rangers on Fox Soccer.

Oh, come on, you guys. Don’t stare at Joker Phillips like that. It’s not his fault his team is like that . . . well, yeah, it kind of is, but still, he’s doing the best he can.

What you should be watching instead: Replay of Alabama-Michigan (ESPNU, 1 p.m.)

But goddang, people, it’s Labor Day weekend. Go outside. Do something on a boat. Eat roasted meat while wearing a bathing suit. There will be more football when you come back, I promise.

What you should be watching instead: No, go with that. Remember this classic Bobby Petrino moment from last year’s Arkansas-LSU game? You’ll be able to catch Paul Johnson doing the same thing, probably toward the end of the third quarter, only he’ll be doing it to his own team. We’re going to need a GIF of that too, of course.