Share All sharing options for: NIGHTMARE PICKS WITH PAWWWWWL BEARER

Any mere mortal can offer you tips on which teams will win or lose, who will cover the spread, whether the over/under will be surpassed. It takes but the smallest amount of brain matter and internet access at the library. But only one can pull back the curtain on reality and show you the horror lurking behind the corner we call the future. Only one man can prepare your mind for the terror from which there is no release. Nightmare picks only come from one man... 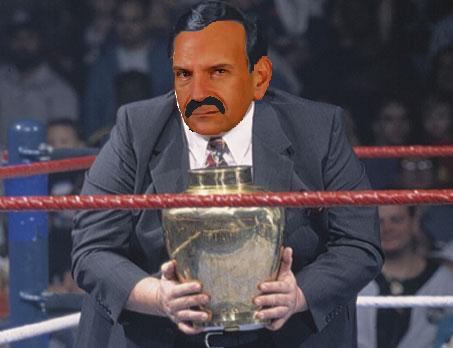 WEEK ONE! A time when the unforgiving scythe of mathematics has yet to descend on any team. But the powers of darkness hunger for new innocent blood!

Texas A&M @ Louisiana Tech: HA HA HA HA! A&M fans thought pain was a series of blown leads and late collapses, but watch as every game they have scheduled this year is postponed - FOR ETERNITY!

UCLA @ Rice: Freshman Bruin quarterback Brett Hundley is lost early in the game when he attempts to retrieve an overthrown ball and falls into the Houston sewer system. When UCLA staff finds him at halftime, he refuses their rescue offer, whispering "It's safer down here. The rats, they are my new teammates."

Wagner @ Florida Atlantic: The Carl Pelini experiment begins with pain - sweet, succulent pain! - when the Owls fall not to an FCS team but to the spirit of the undead German composer! "Wie Todesahnung Dämm rung deckt die Lande!"

Bowling Green @ Florida: A defensive penalty with time expired at the end of the first quarter ruins Florida's quarterback rotation scheme, so Will Muschamp has Jonotthan Harrison snap the ball to no one. Jon Halapio picks up the live ball and runs for a touchdown, and he becomes the full time starter at quarterback.

Clemson vs. Auburn: Kickoff is delayed when the officials misplace the coin for the toss and offer to let the coaches play Rock, Paper, Scissors. Auburn elects to defer after a contentious result which leaves Dabo Swinney's right hand in Gene Chizik's digestive tract. (X-rays later confirm that Swinney threw "turkey jerky.")

Miami @ Boston College: Cleaning out his grandmother's attic on Friday, Chase Rettig finds the Cockatrice Orb, which has the power to turn the holder's enemies to stone. As Boston College takes the field, he produces the Orb and summons its power, only to find his body transforming to CURSED GRANITE, for there is no truer enemy than one's self when you elect to play for BC.

Hawaii @ Southern California: So much blood, so so much blood. The sort of carnage that seem impossible as a matter of volume - surely, the human form can only hold so much liquid! But no, it continues to drain and pool. This is Ed Orgeron's pregame meal.

Michigan vs. Alabama: A surprise Michigan victory puts Brady Hoke on a trajectory of achievement and public adulation he is entirely unprepared for - a fact which will become fatally apparent when he becomes the Earth's sole representative to alien life forms, who are not impressed by his offer of "CHOCOLATE CAKE HUGS FOR NEW FRIENDS"

Kentucky @ Louisville: The elated Wildcats see a win taken from them in the cruelest fashion when Charlie Strong reveals...that he had his FINGERS CROSSED THE ENTIRE GAME.