We're also still sort of helping Dan find a college football team. Proposed: IF he decides to root for a team based on a single play, which is not an insane thing to do. 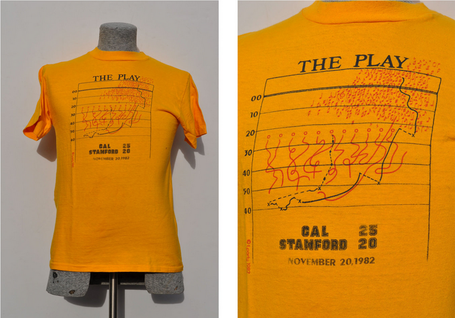 Screwing someone else out of something is a consolation prize, and is always second to actually winning something in football. However, if it's Christmas night and at 11:55 no one has brought you a single present? Well, guess who's peeing in someone's new laptop? That's right: you, vengeful, petty, and often well-motivated you, waiting at the end of the season with a full bladder, bad intentions, and not a single present from football Santa to show for your efforts.

Cal '82 could not do it simply: being the weird gifted kid that they are collectively, they had to make a production of it. Rather than let Stanford receive the gift of a bowl game, Cal--who would not get a bowl invitation, because they were not the team with the talented, horsey quarterback named John Elway--had to wait until the last second to do it, and then do it only via an elaborate moving Rube Goldberg contraption called "the Play." Six touches of the ball, one hotly debated possible downing of a knee, and one dead trombone player later, Cal had won 25-20, ruined Stanford's season, and thoroughly soiled any holiday gifts the Cardinal might have considered theirs free and clear.

We have had moments of insanely rewarding spite that redeemed whole desultory years of merely decent or mediocre football. None compare to Cal/Stanford '82. There are tricks, and then there are brilliant cruelties combining all the necessary elements in their maximums: improbability, reliance on blind, dumb, frantic luck, the imposition of negligent officiating, the undoing of an entire season's worth of effort with the stupid spin of one ballsy, desperate roulette turn played out on your home turf.
The Play is unparalleled. It is an arbitrary, insane, sadistic, and deeply unfair stroke, the jumbled video game kill screen of real life football scenarios. The field is repossessed by the band, order is destroyed, and the entire production of football melts down at the edges. It is one of the most beautiful things we have ever seen along with a.) the birth of our child and b.) that time we set off 1000 bottle rockets in a field while standing way too close to ground zero.
If you loved Cal after this, you could not be blamed. This game is the end of Blazing Saddles, and Stanford wants off this picture as badly as Hedley Lamarr wants off the Mel Brooks classic. We have never been a part of something so totally absurd, but we have hope. You have to have hope, and if there are only four seconds on the clock, make those hopes as absurd and improbable as possible. When you have four seconds left, absurd plans are all you will have left, and the nonsensical becomes your only sensible option.
(And yes, you kill the trombone player. Every fuckin' time.)