Share All sharing options for: THE FULMER CUP: BALL STATE RECEIVES NO POINTS FOR APPROPRIATE CRIME

The final live Fulmer Cupdate for 2012 comes to you from Brian, whose penis is currently the third tallest building in the world behind Reggie Nelson Towers and the Burj Khalifa in Dubai. Remember when the United States cared about making the tallest and biggest things? Now we leave that to countries with money to blow, because we really just want a building we can afford, and here's...here's the world's biggest lean-to. The Maryland football program lives underneath it because they are broke, sad, and also out of money to do things like fire Randy Edsall. Notes and clarifications follow. 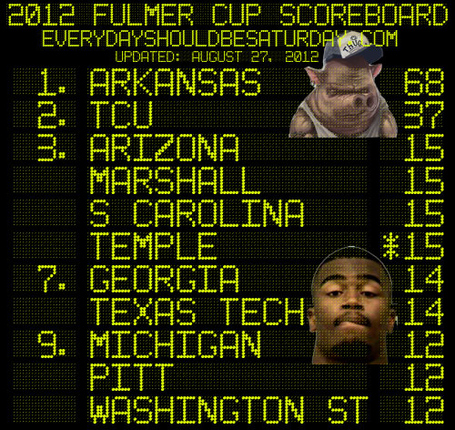 ARKANSAS: Barring an utter disaster for someone that we really, really don't want to become reality, the Arkansas Razorbacks will be the recipients of the 2012 Fulmer Cup. A crime of a magnitude sufficient to move them off the top of the rankings would involve life-crippling injuries, theft on an unimaginable scale, or mass murder. Let's hope they're still there on Wednesday morning when the Fulmer Cup closes for business for the year.*

*Remember: Wednesday is a free day, like the one day a year when Spartans got to kill Helots without penalty. Wanna rob a bank? Do it on Wednesday.

Let's review how Arkansas got here in the first place. The piss got hot early with the usual random misbehavior, but the boiling point came in a residental burglary incident that, with the assistance of the usual charge-happy local DA's office, earned the Razorbacks 58 points in a single shot. Without that single incident, TCU would still be your weed-toting, eyeblood-squirting Fulmer Cup Champs, and we wouldn't even be talking about hot piss and its connection to breaking and entering.

AUBURN: That would one one point for public intox and seriously don't they just tie you to a donkey and send you home or something this is a serious question and stop with the false storylines just stop Auburn's no worse than anyone at this stuff guhhhh football needs to start so you dumb people can have obvious things to write about--

"BALL" STATE: Sadly, Ball State can collect no points for Jonathan Newsome and another player attempting to steal male enhancement pills back in November. Fulmer Cup rules state crimes must be committed in the offseason, and thus the Cialis Bandits receive no points. We regret the premature nature of our excitement over this, but you know, this has never happened to us before, um....

Ball State does get two points in the 2012 Fulmer Cup for the weed arrest of Jonathan Newsome, so it's not like you just get the internet cred for being gangster about your boner pills, Ball State. Hot MACtion: possibly under the influence of performance enhancing drugs of a most personal nature.

TEXAS TECH: Wherever Tommy Tuberville goes there is a player named "Daniel Cobb," and sometimes he allegedly breaks into apartments and beats the crap out of people. The incident's bold nature garners a bonus point in addition to the felony charge, but even if the third-leading tackler from last year's team wasn't brazen in the actual attack, he did take this superlative mugshot: 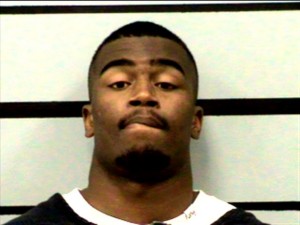 TENNESSEE: Picks up three for Tyler Bray's two misdemeanor charges for the jet-ski incident, which is a pair of misdemeanors augmented with a bonus point for the "that shit Bray-ness" of it all. Yes, Tennessee's starting quarterback did get in trouble twice this summer on beer and boating charges. We feel like this alone is reason to believe Tennessee stands a real chance of terrifying some people in the SEC East this fall. This will end when Tyler Bray is booted from the team for throwing a live possum into a preschool "to teach the kids some nature stuff."

TULANE: He's pleading the fifth and not cooperating, and that always looks great for people accused of orchestrating home invasions like the one Tulane's Robert Mackey is accused of putting together in New Orleans. Mackey is Tulane's leading tackler and a preseason all-C-USA pick, and this probably was not a very well-thought out idea at all. Four points for the Green wave with three from the felony charge, and one for being stupid enough to forfeit actual football talent for a laptop's worth of insurance claims.

UTSA: Picks up seven points at the wire for two felony robbery charges. Already playing like a D-1 team in one department, sirs.