Our countdown rolls on as we advise Dan on the extremely important choice of mascot. 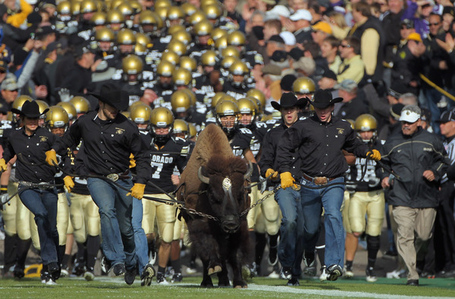 Don't be above choosing a team based on a mascot, or at the least using it to tip the scales if you're on the fence. Ralphie is a fine case of the hazards and bonuses of mascot bias. Bonus: Ralphie is the best mascot, and literally peerless. No other mascot is a raging, rampaging, untamable mass of angry muscle, prairie colored fur, an infuriated four-legged killing ball of hooves, horns, and purple tongue barely kept under control by a scrambling crew of cowboys. They have to corral her and place her in a pen to keep Ralphie from wreaking sweet havoc on the sidelines. How badly we want this to happen in real life is a serious indictment of us as a person. We can live with that, but still.*

*The player who rushes toward Ralphie in this hypothetical? An idiot, but a beloved one in our personal hall of fame.

Hazard: Colorado has been bad at football for almost a decade. You might want to remember that when you chain yourself to the Buffalo, it might want to take you places you definitely do not want to go.

LSU does not even think about letting Mike loose. The current variation, a half-Siberian Tiger, weighs 500 pounds and belongs to a species more than capable of giddily hunting a human being. They back up a cart to the habitat, and if Mike wants to, he'll go for a ride around the stadium, staring out at the stands like the world's most dangerous housecat. We would love to know what goes through his mind, but it's probably something like "FRIEND FRIEND FRIEND MEAT FRIEND MEAT FRIEND MEAT FRIEND." You don't want to know which one you are, since either is a terrifying thing to be when you're talking about a 500 pound tiger.

UGA doesn't even attempt the intimidation track, instead opting for something so lovable, fat, malformed, and stunned by the heat that it can only be the living embodiment of the prototypical Georgian: once fierce and honed by the trials of life into a lean, blockheaded mauling machine, and now too fat and comfortable for its own good. Picture Paula Deen on a block of ice: this is not an inaccurate way of looking at UGA's relationship to its mascot, because everyone likes them, for the most part, and everyone also acknowledges the overuse of certain beloved ingredients.*

Mascots are totems, symbols of this random set of beliefs or ideals encased in a single icon, animal, or image. Totems do a lot of things, but one thing they do is carry the spirit or concept of a soul. That soul is divisible, living at once in the body, but also in the invested icon, animal, or image. From Fraser's The Golden Bough:

If this explanation of the totem as a receptacle in which a man keeps his soul or one of his souls is correct, we should expect to find some totemic people of whom it is expressly said that every man amongst them is believed to keep at least one soul permanently out of his body, and that the destruction of this external soul is supposed to entail the death of its owner.

As a college football fan, you will belong to a totemic people, and the fate of that mascot--virtually, literally, or even in symbolic competition on a Saturday--is a little death or survival of the self. It is also keeping that little bit of you somewhere in cloud storage, a file you might only access on Saturdays. The milquetoast consultant who gets arrested for drunk and disorderly at a tailgate could be too clearly in touch with that spirit, giving some merit to the claim of being "too full of Bama" for your own good. (And booze. Gallons and gallons of ill-advised booze.)

It is pagan as hell, and the oldest move in the book, and control over wearing that mask (whatever the degree) would be a lovely option. When Texas rolls Bevo out, it would be nice to not think, GODDAMN, THAT'S A WAR COW FROM HELL, AIN'T IT. It would be nice to not feel some visceral reaction to an eagle being loosed over a terrified and thrilled crowd in Jordan-Hare, but there it is, a full-fledged Planet Earth-style awe-boner at the sight of a raptor in flight. We love being a Florida fan because nothing, nothing has less human remorse than an alligator, a dull, unstoppable predator that might as well be the embodied id of America's psychopathy test track. It is as close as we ever feel to the state, save for that moment when you walk out of an air-conditioned house, watch your glasses fog up, and feel the hot breath of the subtropics on the back of your neck.

The mascot is the symbolic untamed, and salute is compulsory. The only question is whether the beholder does it out of desperate aspiration, or with keening sympathy.*

*Example: we always salute Smokey from Tennessee with sympathy, because we too bark irrationally and in all directions when traveling in Tennessee, and would rather just go lay down.