THE BEST CARS FOR TAILGATING, CORRECTED

Share All sharing options for: THE BEST CARS FOR TAILGATING, CORRECTED

Kelley Blue Book likes its SEO, and thus slideshows of calendar-relevant vehicles for seasonal sports just around the corner happen to appear on its site. Their ten best cars for tailgating includes the 2013 Mercedes G-Class because someone has either only tailgated at Notre Dame or Stanford, and knows nothing about tailgating. "You know what goes great with tailgating burgers? Foie gras!" <--Probably does, but still GTFO with that shit. No one's cooking red peppers on the grill, much less doing it next to a goddamn Mercedes light SUV.

It's all lies, of course. There really is only one vehicle capable of performing every task needed for a tailgate. 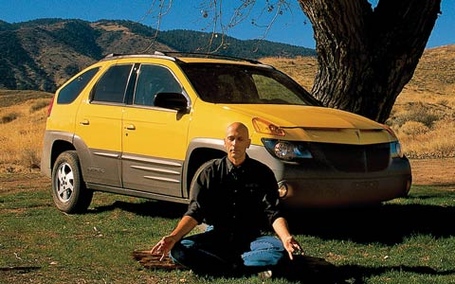 Tailgate? Yes, one guaranteed to brain anyone foolish enough to open the tailgate and expect it to stay open for longer than five seconds. It's coming down, and when it does someone is losing a finger because the Aztek wouldn't be the Aztek if it didn't get a little blood sacrifice.

Room for supplies? Not really, since the interior is much smaller than you think, and you will have to ride to the tailgate the way every miserable soul in a Honda Civic does: with a flat of frozen Bubba Burgers in your lap, and probably stabilizing stack of marinating meat and cold salads wilting in the heat already. No one eats potato salad, and no one ever has, but look! You brought a gallon of it anyway because someone keeps asking for that shit, and then leaving it untouched on the table.

Tent? Oh, yes, there is a tent. It sort of wraps around the back like a fake foreskin, and has a huge flap that dangles down a giant black tongue. If it does rain, you will have to crawl onto the tailgate--the sort of way higher up there than you thought tailgate, of course--and huddle in the cramped interior of the shitty Aztek, probably next to that giant pile of neglected potato salad and a pitbull that just wandered off the streets of Baton Rouge. He's not leaving, ever. Learn to love him, and the eternal fear his very presence brings to you and your family.

The final kicker? If you are driving down the highway and feel the powerful need to meditate like a racehorse, just pull over and do it! It's the Aztek. Positive thinking is all you have to protect you from it.*

*Bonus: documentedly capable of running over people at high speed without damage to the car.