When we remember, we are counting down to the season and helping Dan Devine choose a team because he was cruelly not raised around college football.

It's okay to choose a team based on a player. Sometimes that's easiest, since players tend to gravitate towards the teams they deserve. 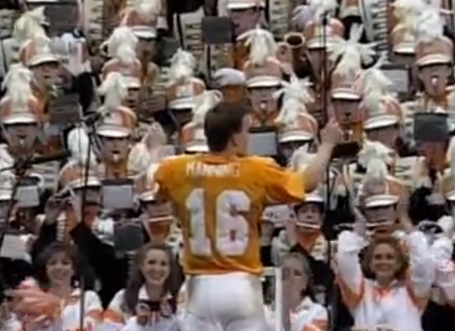 For instance, Peyton Manning really couldn't have ended up anywhere else. The Tennessee fanbase's dominant key is dour. A deep ingrained suspicion lives among them that at any moment, the sky will cave in, and that it's better to leave in the third quarter before you have to watch the pain live and in brilliant color. The lyrics to Rocky Top are, after all, basically about a hard mountain place where you drink and avoid people from the government, and how great that is even though you're singing about poverty, alcoholism, and how you don't live there anymore because you like money and food, schools, and opportunity. It is also the song of a fanbase that at any age is around fifty years old, no longer lives on the farm, and sometimes still misses the mules in between long dark spells of getting the boring, drab shit of everyday life done.

Peyton Manning was born fifty years old and holding an invisible briefcase, and was thus perfect from the start: demanding, pissed off, less consumed with the joy of doing and more with the disappointing gap between his self-estimated potential and what happened on the field. Shushing you for talking during the lecture, Peyton was water at the wrong level in college, dissatisfied even in victory that a certain route hadn't bent a certain way, or that he'd misread a Cover 3 and thrown an inconsequential interception. Peyton was fascinating even in college because he was miserable, perpetually seeing the three passes he missed, the missed blocks, the gap in the defense they left unexploited, and not the four TDs he threw. He seemed less to enjoy football, and more to savor the hatred he could mine endlessly from the seams of the imperfection around him.

As it turns out, this would be Peyton Manning not just at Tennessee, but everywhere: the NFL, the offseason, the film room, at the laundromat. He would be good at Tennessee: oh, so very good. He would not be the one to lead Tennessee to a national title, though. The salutatorian, efforting his way through every second of his existence, was a brilliant robot surrounded by amateurs. In his wins, he saw the math unfolding steps ahead of his own teammates. In his losses, especially in his three losses to Florida, he threw balls professionals would have caught, and college players fumbled, dropped, or simply missed due to misreads that were disappointingly human, and to no one more than Peyton himself.

He'd move on and hop easily into the pros, always flustered, always yelling, always redfaced and staring intently at a fresh printout on the sidelines. His unhappiness made him great in the NFL, where he could devote his whole being to the deformed and lucrative pursuit of football precision. If you read A Beautiful Mind, there is this description of the lounge in the Institute for Advanced Study, a kind of cordoned-off mutants rec room where guys like John Nash just stared at newspapers and thought impractical, terrifying things all day. The NFL for Peyton Manning was that place, the only place where his discontent and obsession could find full enabling. It was, for someone who watched his athletic adolescence, thrilling to see. Tennessee would ultimately be a kind of finishing school in frustration for him: the one b-plus a year he got was the Florida game, something he never quite mastered.

Somewhere in this world there is a 15 year old prodigy filled with all the anger in the world at how unfair it is that he has to sit through this shit. 99 of 100 of these little Max Fischers are wrong, half as smart as they think they are and less talented than that by half. Peyton Manning was the one of 100 who was right, which is sort of what made him perfect for Tennessee.He was happy everywhere but on the field, where he was perpetually miserable in the most finicky yet productive cloud of unhappiness Tennessee had ever had.

It was, in its best moments, utterly endearing, especially when he was so obviously the kid who wore a tie to middle school and carried a briefcase dreaming of sweet, burdensome adulthood. Peyton Manning wasn't very good at being young. That's not always a bad thing in the right places, with worried, forever gloomy and glorious Tennessee football being one of them.