POP TARTS ARE SO VERY IMPORTANT RIGHT NOW. It's so very hot in here right now, like our soul's been placed in a...toaster. 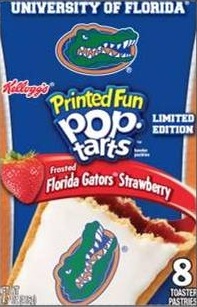 The Florida one makes so much sense, because we really are a kind of pop-tart fanbase: only around since the 1980s or so, amalgamated into one durable, tasty, and utterly artificial whole through the magic of science, and usually consumed with some degree of regret and shameful pleasure. The Michigan one is the one we love because LOL MICHIGAN WHEN LLOYD CARR FINDS OUT ABOUT THIS YOU WILL HAVE TO EXPLAIN WHAT A POP-TART IS TO LLOYD CARR.

Twitter pretty much ran the pop-tart jokes into the ground last night, but we have to remark that the Wisconsin pop-tart would just be a box of smokes and some beef jerky.

DODGY AND ENTIRELY PLAUSIBLE. It's likely complete bullshit, because as Florida and Miami fans know, weed makes you a better football player, not a worse one.

YEAR IN AND YEAR OUT THIS IS OUR REFRAIN. Bill C on the Gamecocks is pretty much every Spurrier Gamecock team ever, meaning utterly unpredictable after you get to six wins no matter how much talent they have.

YOU SING THE SONG OF TECMO BOWL, YOU WIN OUR HEARTS AND MINDS. Chris Brown on how the predictive playcalling system and combination of packages in a single play has utterly changed football. Whatever makes coaches look stupid for watching fifty hours of gametape in a week is something we totally stand behind.

ARKANSAS IS VERY PROUD OF ITS HEIGHT. Every wide receiver on the roster this year is over six feet tall, which is really just an elaborate scheme to make Nick Saban feel bad about himself.

STOP BLEEDING, OKLAHOMA. Okay, he never played a down, but still: Oklahoma's roster situation is not exactly optimal at this point, making the Sooners one of at least three top ten teams with what one might call serious roster issues. The top ten this year is not pure ass, but it does have hints of butt followed by notes of derriere.

I'M JUST CALLING TO VERIFY THAT MARK RICHT HAS LOST CONTROL OF ME. It's not that they're harassing recruits and violating NCAA recruiting rules, it's that they really do call random Georgians asking "How 'bout them Dawgs?" before hanging up. We are not lying, and wish we were.

WHYYYYYYY. Cowboy Altitude clearly is a subsidiary of Aperture Science, and doesn't care if it kills people in its experiments because science is not about why, but why not?

ETC: Well, ma'am, if you must. Swedes ain't afraid of no moose. Wright Thompson, just being Wright Thompson. Al Roker's avant-garde turn on the Today Show is our best current performance art.