BOTTLE SERVICE NOW AVAILABLE AT EVERY LOCKER. USF is located in Tampa, Florida. If Portland is the town where you can and should put a bird on anything, then Tampa is the city where everything will eventually be turned into a light fixture or decoration from a strip club. 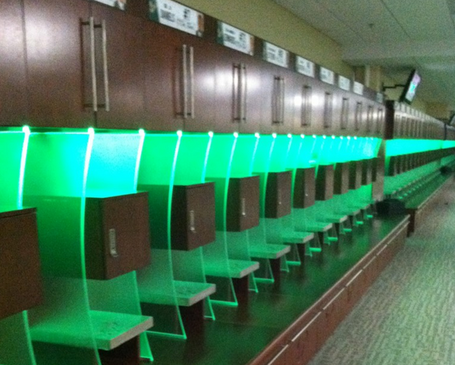 The neon may or may not be your thing, but the locker room DJ? OFF THE HOOK. (Via)

THAT'S NEVER GOOD. MIssissippi State wide receivers coach Angelo Mirando resigned for "personal reasons" just 13 days before the start of the season. Wide receivers coach has been the exploding drummer for the Miss State coaching staff, with five different coaches playing the role (including Mullen.) The staff will "weigh their options," which probably means leaning hard on the grad assistants and picking up the recruiting slack themselves because, you know, 13 days before the season.

THAT'S NEVER BAD. Wisconsin keeps the instant transfer magic track rolling as Danny O'Brien, late of Maryland and a refugee from the Edsall Deforestation Zone, will be the starter going into the 2012 season for the Badgers. O'Brien threw for 22 TDs his freshman year at Maryland before the Crowton effect set in, and will play in the usual beef-forward Wisconsin attack: giant linemen, a rolling slab of a running back, and bigass play-action passes thrown over the top of the defense.

SEEMS ACCURATE TO ME, PAWWWWWLLLL. Alabama did not lose a game last season, per important members of the Alabama media guide family. Points just tell half the story, man.

2 HOTT FOR UTTAHHHH. Big men on diving boards: they never, ever disappoint. In other training days videos, Oklahoma State begins every day as champions do, and that is with bacon.

THE FALSE START OFFENSE BEGINS. Brent Pease's offense contains multitudes. To be more specific, likely hundreds of false start penalties, and definitely an accepted teamwide use of the phrase "brainfart" as a technical term.

AT THIS POINT AIRBHG'S REALNESS GIVES HIM HIS OWN ADDRESS. You have got to be kidding but no, no you really aren't, reality, are you?

KEVIN SUMLIN IS UNAFRAID. Mike Leach backed him up on that re: the SEC, but seriously Kevin Sumlin was already there by several thousand miles in the total lack of fear department. (He coached at Houston. THE ENTIRE CITY IS MADE OF FEAR. And humidity.)

THANKS FOR THE SUPPORT, MITT. That is how you get 32 handwritten scholarship letters sent to your home, Mitt. And to Matt Romney of Peoria, Illinois, and to Mick Ronley of Melbourne, Australia, and also to Murt Tromblo of Koupio, Finland, because Hugh Freeze just likes giving scholarships to everyone even if they're not going to the right heaven.

IN LAME DUCK NEWS. It's not unobvious news, but if a duck is already lame, then BC's Frank Spaziani is your totally legless duck after the exit of the AD who hired him. BC should look at hot young coach talent like, you know, Jeff Jagodzinski. Just spitballin' here.

UNEMPLOYMENT AND SADNESS DIVISION. Someday they will fix this with better terminology.

ETC: This horse is the single greatest video game character of all time. A wise person once told us you haven't lived until you've had a horse killed for the insurance money, and if that is true then no one ever lived more than these dudes. No one's ever really nailed Florida writing-wise, but this is close. RIP, Tony Scott. We owe you for Top Gun forever, and for Days of Thunder on selected offseason Thursday nights.