NOPE NOPE NOPE. Yes, it has higher production values than the Tennessee "Overcome the Tide" video, but that is true of most Kige Ramsey Wal-Mart product review clips. Yes, it appears to have been "produced," and for that you get three to four cents worth of credit. It does not feature a cameo by Childish Gambino, which while not a possibility is still something that deserves some degree of praise here.

Still, Bane's "Still Choppin'" is atrocity in a fitted, and it gets so much worse and more FSU-ish when you read his bio.

Its no secret that Bane is a non-conformist.

His anti-industry sound is a direct result of his values and morals, which stem from his faith in Jesus Christ.

He promotes celibacy, sobreity, faithfulness and righteousness in his thoughtful lyrics. Bane has long been an advocate for the death of the current hip hop industry so it can be reborn as a positive influence on its listeners. This idea of forsaking the rap game, instead of attempting to "save it," is immensely unpopular to the commercial audience, but to be a Christian in a ungodly world is to be rejected.

"I'm into hip-hop, but I'd like to turn it into a really chill youth group where we can talk about God." Bane, we sincerely hope Scarface drives up to your house, throws a molotov cocktail into your leased Escalade, and then drives off cackling as the flames reach skyward. Bane also has a Christian rap alter-ego called "Kloak'd," and owns a Colorado Rockies fitted. Jon Bois and Bill Hanstock did not make this man up, and GO NOLES. He's all yours.

TRADER FERA ALSO HEADS WEST. And to the south, joining the growing queue of those leaving State College. 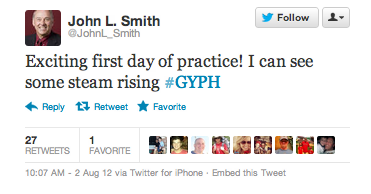 This is all going to be so much fun for everyone. (Except Arkansas fans.) GET YOUR PISS HOT!

IT IS HARD TO KEEP THEM ALIVE iN HOT WEATHER. But at least follow UGA's lead and clearly announce the death of your bulldog mascot, and then immediately request an even more obese, inbred, and utterly adorable bulldog so that you can continue to make the same mistake over and over, Louisiana Tech. It's like you don't know how to Southern, or as we call it, "traditioning." (Then again, covering up the death of a bulldog and then making a public story out of it is a pretty redneckish caper.)

IF YOU ARE A LEFT TACKLE PLEASE CALL MIKE GUNDY. Possible Cowboys starter Michael Bowie is transferring after the usual "violation of team rules," something translating to "we're both just utterly sick of each other's shit."

OF COURSE IT HAPPENED LIKE THIS. When Lane Kiffin calls, you best believe it involves private jets and casual references to expensive forms of transportation.

WE HAVE FINALLY FOUND A USE FOR FACEBOOK. Howard Schnellenberger photos appear on it, after all.

ETC: Hey, weightlifting is really hard, y'all. Immense pride swells for BurritoBrosShit, who bemoaned the pitiful stateof the Jacksonville Jaguars at KSK.