A QUICK FIELD NOTE ON THE PAC-12 NETWORK

Share All sharing options for: A QUICK FIELD NOTE ON THE PAC-12 NETWORK 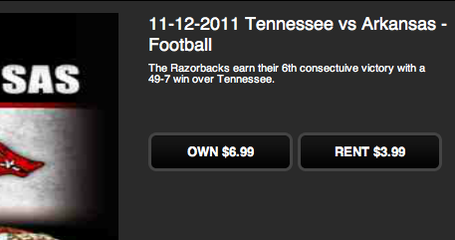 We are working on a Pac-12 Network piece for Monday, but a kind of sidenote piled up in our brain that works better over here. It is a bit of a wonky dilettante-techie's thought, but it is one that will not go away.

One thing the Pac-12 understands that most other conferences do not is that they are a content provider, and that content goes pretty much where it wants to go. Thus the network's insistence on their games in all sports only being tied to a cable subscription: if you have one, you will be able to watch anything they do on almost any device whatsoever, and do so without the pesky hoops you might have to jump through in order to watch New Mexico State vs. Florida on the SunSports network or (gaaaaahhhh) pay-per-view.

Their delivery system--hot football, delivered through whatever pipe you choose--is beautiful, and should be given the network's home base sits right in the middle of America's tech nursery. But the beauty transcends design: pay the Pac-12 once in the form of a cable subscription, and for the most part it's all yours.

Right now the fee structure for content in the SEC does not work like this. It works more like a series of bloated country sheriffs hiding just behind the speed limit sign that turns the 65 mph highway into a 25 mph school zone for thirty feet of lucrative, fee-heavy territory. It is a small irritation, relatively speaking, and one the SEC does not really have to worry about yet thanks to schools living off their own digital rights packages and the current television contracts' payoffs.

The SEC Network will arrive, mostly because the SEC wants that same revenue stream in combination with its existing contracts with CBS and ESPN--contracts that in retrospect look way too long, and are now undervalued compared to what the Big Ten and the Pac-12 will make from their deals.

We would like to be really optimistic about what it will look like when it gets here. We really would, but our most pessimistic predictions have the SEC farming the entire thing out and demanding a fee at every gate while keeping team's local digital packages intact because that would be the fat and lazy thing to do. We mean, just look at this hot fucking mess. Available on TiVo soon!) It's a regional specialty, especially when demand for the product exceeds or blunts the requirement of quality.

p.s. Not entirely hatched, but that's what was brewing in our brain walking though the Pac-12 offices.

p.p.s. Being wedded to ESPN for everything brings this lodestone: you are married to their privileged spot on the American cable pricing chart. When/if that collapses, you will be taken along for the ride. So will every other conference on the ESPN wagon, but none more so than the SEC.

p.p.p.s. Not that it's all perfect with the Pac-12 network's online function from the sunny shores of ATL, mind you.

p.p.p.p.s. The SEC does have one advantage: they're going fourth after the Mountain, the Big Ten, and the Pac-12 But "forward-thinking" hasn't been associated with the SEC since the addition of the championship game, and we're not optimistic since there's little immediate incentive for the SEC to do any better here.