NIKE IS SO FAR AHEAD OF YOU. 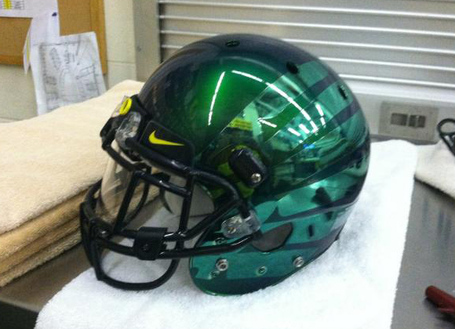 First they shock by varying their uniforms. Then everyone else does it, and does it poorly, indeed very, very poorly. Finally, when Oregon releases their latest variation on "Eco-Stormtroopers From A Positivist Future," you regard them as the comforting classics of the genre. They had this in mind all along because they are Nike, and create what you want before you even know it while Adidas and Under Armor redefine retinal molestation. (via)

REHAB. Tyrann Mathieu is in it. Skipping the possibility of playing for the McNeese States of the world does hint at a very long play for Mathieu here, i.e. one that could result in his return to LSU next year provided he completes every step of a publicly acceptable process of redemption and penitence. The chunk of an NFL signing bonus he could regain from the delay would likely be more than worth it, particularly if he thrived in the comeback.

FINALLY, THE RECRUITERS OF THE WORLD CAN GIVE UP THE NUISANCE OF FOOTBALL. If the director of personnel is finally brought into college football, we can at last ditch the position of "recruiter who sometimes waves a towel at a group of position players" from the coaching ranks.

SHUTDOWN FULLBACK: up at ten with BOLD PREDICTIONS.

DAMN THAT SOCIAL MEDIA. Dana Holgorsen clarifies that no, he did not invent any form of social media, and has never needed anything more than y-Cross and a flip of that feathered mane to get what he needs in life. If Dana Holgorsen has "poked" you, girl, it will most certainly not be on Facebook.

DANCE YOU BIG BEAUTIFUL BASTARD. Show us a big man dancing, and we will applaud wildly.

6-4. The ugliest game in the history of the universe not involving MIssissippi State and Auburn had a fairly dramatic storyline going behind it for Kirk Ferentz. Having mentioned Mississippi State, we should remind you that Sylvester Croom was a horrendous offensive coach because this is something you should never, ever forget.

ETC: Dr. Shine and Dee-Dee never wanted more than to turn into jets. Why did you not let this happen, laws and other stupid things? The Red & Black situation is a good reflection of how things are done in Georgia: poorly. Whoa, that dude with two screens is KILLING IT. John Elway's comeback stats may indeed be slightly exaggerated. You had us at "me getting the gift of pornography from Mobutu Sese Seko." MMA gyms are, like, the worst place to rob. Tony Siragusa, a plague available on your local television screen. Drive, clearly a Florida propaganda film.