The Idaho Vandals and New Mexico State Aggies remain the two sad teams thrown clear by realignment, left unclaimed by expanding conferences in the last frantic rush out of the collapsing husk of the WAC. Pat Hill is still living in the deserted back half of it, and stages a hell of a cockfight there on Thursday nights if you're interested. Bring Sterno. He's running low.

Idaho has announced its solution to the problem of being left behind: independence. Take the Vandals off the grid, and Robb Akey will just dig a latrine, crank up the generator. and declare the Kibbie Dome a free state for football, pelt-trading, and the sale of Robb Akey's homemade Idaho potato brandy, "Vandal Eyez." (Warning! Do not consume "Vandal Eyez" near large magnets, and certainly never, ever around open flames.)

Idaho football needs five home games with FBS opponents to remain in FBS, and currently has only one with Northern Illinois scheduled. If that does not workout, there is always the option of creating a new and innovative role for the Vandals: getting them a special exemption, and then becoming the Washington Generals of the SEC. (click to embiggen) 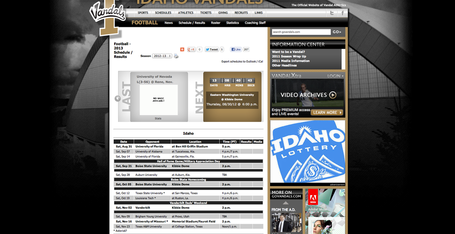 Moscow, Idaho: soon to be the cold indoor practice facility all SEC teams never knew they craved. Robb Akey will also be manning the grill at the concession stand if you need anything, because everyone's got to take on a few jobs at once to keep this thing afloat. No: this burger's not coming out well-done, ma'am, no matter how many times you ask for it. A man's got to have principles, and one of his is never serving a piece of meat without a reminder of the living being that sacrificed its life for yours. Eat it bloody and like it, or get the hell out of his mustache, lady.