Sometimes the best teams you love in a season are the ones that leave you no choice in the matter. Texas Tech 2008 had Eric "the Elf" Morris, Brandon Carter and his eyeblack warpaint, Graham Harrell and his horrendous Christmas sweaters, the slippery Baron Batch, and Crabtree, who was open. On Tuesday he was open, and on Wednesday he was open, and on Thursday and Friday he was open late, and then on Saturday he simply did not close, and was open from midnight until whenever he decided to close.

When the moment arrived, it was four vert, thrown to the outside shoulder. It was always four vert, and everyone in the tortilla-tossing, full moon lunatic's ranch in Lubbock knew it would be four vert. Mack Brown knew it would be four vert, and so did #3 Curtis Brown in coverage. When we first saw it, we swore the ball went through the defensive back like a video game glitch, a mistake bailed out by bad programming and a hiccup in the processors of reality. 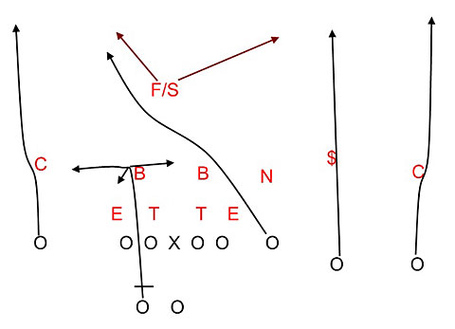 In reality, the ball goes the only place it could go: over the outside shoulder, in the tiny gopher hope between the defenders, and into a pair of grasping receivers' gloves. And then there is Crabtree, pulling away and shedding his broken defenders like plastic flying off a crashing F1 car. Jaws drop on the sidelines; the stands turn into a hive of deranged bees.

The camera catches Colt McCoy crushed on the sidelines, and then Mike Leach walking hurriedly across the field, and Musburger attempting to pick up the scattered pieces of his brain on-air while everyone realizes precisely what had happened: Mike Leach had called four vert, Graham Harrell let it loose, and Michael Crabtree carried it through the Stargate and into the great beyond. Four vert or die, motherfucker. Four vert or die.