THE BIG EAST HIRES A REAL COMMISSIONER. The Executive Vice President of Programming for CBS Sports, Mike Aresco, will reportedly be the new commissioner of the Big East. Aresco was instrumental in negotiating the SEC's deal with CBS Sports, a long-term contract considered innovative and interesting until everyone else made their own even more innovative and interesting television deals. (Interesting = "lucrative.")

We would not torture Big East fans by suggesting they will get as big a deal as the SEC, but YOU'RE GETTING THE SAME DEAL MAN! SPEND IT NOW BEFORE YOU GET IT IT'S THE AMERICAN THING TO DO. Seriously, though, they might outdo the ACC's deal, and wouldn't that be fun for John Swofford.

We asked Paul Pasqualoni for his reaction to the hire. 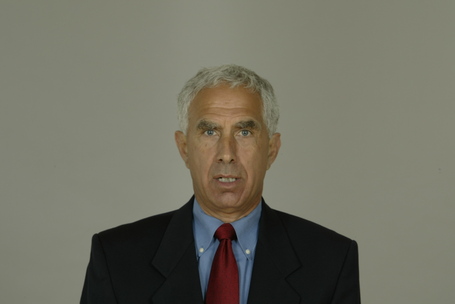 Thank you, Paul. Insightful as always.

SETTLE THE HELL DOWN. Auburn's own Reuben Foster did not meet with the NCAA, but instead with the Alabama High School Association regarding his transfer into Auburn High School. Please stand down, because the Auburn compliance office remains the Seal Team Six of compliance offices. Now, Memphis? There's some shit there, and you and the NCAA know it.

FLORIDA FOOTBALL YOU ARE NOW A SORROW TO US. Ahhhhhhh fuck:

They were maybe the fastest team that we played against, but I did not think they were tough, and I think there were some issues between some players and coaches on the offensive side of the ball.

TODAY IN INFOGRAPHICS. The new boys in the SEC get the graphical treatment, and that's neat, but please, if you mess around with one thing today, let it be Slate's map of auto-entries for U.S. states. "Why is Arkansas SO POOR?" That's all Arkansas gets. Sorry, hot piss toters, but at least you don't belong in the "fat, boring, racist" belt of MIssissippi, Alabama, and Georgia.

RAY-RAY OPTS NOT TO SUE. Ray-Ray has decided not to sue over being declared ineligible, and will play at an NAIA school for 2012. Lawyers remain expensive.

THE HELIUM SHORTAGE STRIKES HOME. Nebraska should just ball out and use hydrogen. It worked just fine for German balloonists and blimp captains for years, and what works for Imperial Germany should totally work for Nebraska.

A MINOR NOTE, REALLY. Penn State's accreditation may theoretically be in trouble, but the university will likely be fine after it formally answers some questions and promises to take steps, blah blah blah. This has happened before with large football-forward universities, and it rarely results in much happening. (Except for the exile of Bobby Lowder, mind you.)

THE COMPLETE FALL PLUMAGE. We are now making it our life's mission to get an authentic Virginia Tech turkey-foot print helmet.