I'm told I can't vote for us or something. Butthorns, listen up: Lane Kiffin votes for himself every day, mostly on ratemenude.com. I don't care what you say, SexxLexx9228. The ladies aren't clicking for the abs. But whatever. Mule down there, don't care.

Since the USA Today is just gonna SPOILER ALERT my shit all over the web or whatever anyways, I figure I'd just go ahead and do it proactively myself.

2. Ohio State - There's no coach I respect more in our industry than Coach Urban Meyer. I text him literally every time he gets a new high profile coaching job. Wish those guys the very best.

4. Virginia Tech - I've never watched them play. In fact, no one's ever seen them play. Suck on that, Coach S. Poll, whoever the hell you are.

5. UCLA - Would be higher, but the absence of murders near campus has made them soft.

6. Oregon State - Without a doubt the toughest team in the state of Oregon.

7. Washington - Coach Sarkisian is a friend. Besides, talking dogs will one day rule us all. Let me be the first to welcome them with open arms.

8. Arizona State - Todd Graham's in it for the long haul, folks.

9. South Carolina - We may have won the lawsuit to be the only USC, but they'll win that Civil War yet. Fight on.

11. Hawaii - Greg McMacklin was a nice man and someone I consider a friend in this industry. Between us though, guy was always kind of a faggy dancer.

12. OMITTED - Many airlines and hotels omit the #13. Irrational fears are for the cowardly. Twelve is one lower than 13 and thus more likely to strike sooner.

14. Arizona - Might have a problem when Joe Arpaio deports Rich Rodriguez for not holding papers.

15. Washington State - Credit to Coach Mike Leach for discovering Pullman, Washington and only losing 3 in his party in getting there.

17. Alabama - They had to go to the Pac-12 to get an offensive coordinator, because they're illegal in the SEC. I made it a year on the run before i had to leave.

18. TCU - Kick a panting and wheezing Big Ten team's ass in the Rose Bowl, and you're officially a member of the Pac-12.

19. Colorado - This is Rick Neuheisel's year. I can really feel it.

22. Oregon - Their uniforms still look like the inside of a robot stripper's business. And believe you me, I know my robot strippers. Just sayin'.

24. Auburn - I respect any man unembarrassed by his Chizrag.

25. The Seattle Seahawks - Pete's got this one under control. 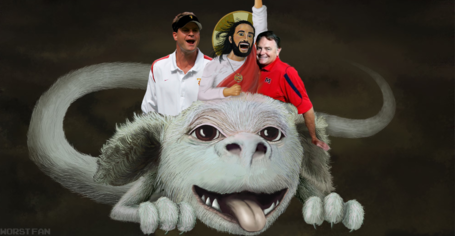