YOU NEVER MADE THE CONNECTION BEFORE, BUT NOW YOU WILL NEVER UNSEE IT. Trooper Taylor is known for waving a towel, and now OH GROSS THAT'S JUST DISGUSTING. 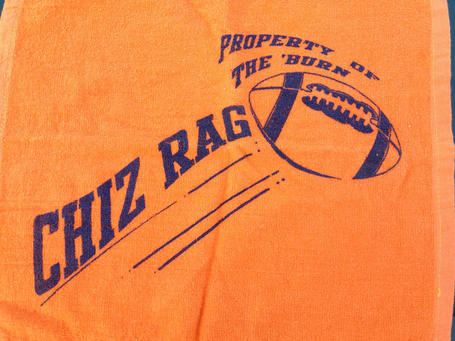 Oh, and remember that this is the only result for "Trooper Taylor" in our Getty Images tool.

SPEAKING OF TEAMS THAT HAVE GONE LIMP AT THE WORST TIME. Oklahoma gets the full treatment from Bill C, and the offensive line has serious issues and WHOA METOYER VIDEO. Nevermind, Oklahoma is winning all the football this year, and it's all gonna be fine. #onethousanddeepballsinarow

LANE KIFFIN JUST GAVE UP HIS COACHES' POLL VOTE. We hope he gave it to a homeless man, aka someone who watches more individual college football games through the year than a football coach charged with devoting all their thought and effort to 12 different teams only. This homeless man may or may not be Beano Cook. We're totally fine with it either way. Hey, look, USC is just as safe as UCLA! It's a pretty awesome day for Lane Kiffin.

AND YOU GET A SCHOLARSHIP, AND YOU-- Steve Spurrier joined the preseason James Franklin scholarship giveaway by borrowing a page from Urban Meyer's playbook and having a kicker boot his way into a scholarship. Spurrier also waxed old bro-ishly about his tenure in the SEC, because he is old and is only mildly uncomfortable with it now.

RETIRING FOR [REASONS REDACTED BY MASSIVE LAWSUITS.] Just pursuing other interests, as Roger Goodell might say.

DO IT. San Diego State could just live dangerously this year, and if they do? You'll have our steel, Aztecs, as well as basic math in a lot of cases.

IMPORTANT MUSTACHE NEWS. Michigan has an early prospect worth monitoring. (Slide 15 please. The one who looks like a French balloonist.) Michigan under Brady Hoke also continues to lead the Big Ten in quirk by having a real live noodler on the roster. In other impressive non-Michigan player profile pictures, this also deserves mention for sheer congeniality.

ETC: Rwandan cycling isn't where you think you'd get all emotional, but here we are. Nudists need younger people, so DRUM CIRCLES. Jesus doesn't really want you talking about all that, ma'am.