THEY HAVE IT ALL COVERED. Question their quarterback situation, their defensive depth, their ability to compete in year one of their SEC tenure, sure. Never, ever question Texas A&M's commitment to the brand, though. Never. 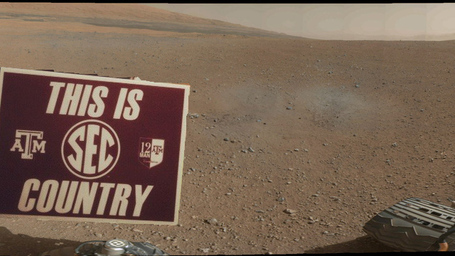 They also put one up in Austin, a place that contrary to all reports from Aggies is not filled with aliens and howling red winds. (Okay: possible aliens, occasional dust.) (Image via BurritoBrosShit)

LSU PRESS CONFERENCE, 1 P.M CST. We don't know what it's about, and neither does anyone else, apparently. The obvious guess is something regarding QB coach Steve Kragthorpe's health. Kragthorpe stepped down from the position of offensive coordinator after a diagnosis of Parkinson's Disease last year, but continued as a position coach. We really hope it's not that, and that this is all some cheap endorsement ruse where Les Miles walks to the mike and tongue-kisses Flo from the official new insurance provider of LSU football, Progressive.

BEER PONG BRAWLS ARE NOT ALWAYS A GOOD THING. Christian Littlehead, troubled DT for Oklahoma State, has a warrant out for his arrest in the case of an assault on a woman during a beer pong game. Don't punch people, especially girls, and especially within the sanctified boundaries of a beer pong table.

QUIEN ES MAS HOTSEATTINGEST? Holly has the crew over for the obligatory hot seat discussion. What's one of Randy Edsall's greatest allies in the war against football at Maryland? Debt! Crushing, coach-saving debt. There is discussion of Tennessee, and that gives us the obvious opportunity to share this.

"IT'S FIRM." Dan Mullen, just pokin' all his running backs to see if they're done to perfection.

YOU WOULD TAKE HIM BACK, BUT THAT'S HOW ALL ABUSED SPOUSES ARE. Bobby Petrino still has Arkansas fans in an emotional bind, one which will only get more twisty and bindy as the John L. Smith era unfolds/explodes/mutates and eats your car. But hey, at least you've got a replacement for the mistress now! And he's covered in that stuff Washington's defense had all over them in the Alamo Bowl! That stuff is PCP. You do not want to ingest it, ever.

WELCOME DAMN EAGLE. College and Magnoila is our new Auburn blog. Somehow, they will beat us by a field goal this season.

BECAUSE YOU NEED THIS. Someone give this round mound of pure coaching skill a job. Now.

THIS IS ONE REBUTTAL. Mora's still apologizing for the remark, but this happened and you should know it.

ETC: "This plane is definitely crashing." Our attorney had a client who crashed his plane in the Okefenokee on the way back from the Masters, and who hobbled out of the wreckage only to find the first house he went to for help had a very angry redneck holding a shotgun at his face. He then got to the hospital, where they informed him he had been bitten by a rattlesnake in the process, and hadn't noticed. If nature wants to fuck with you, nature will FUCK with you. Brandon Stroud writes one of the more moving things you will ever read about Street Fighter. Chicken finger mummy. Never ignore important moose news. All Stephen Greenwood does is make pretty things. Paging Gary Pinkel: Google's got you, man.