The countdown this year: finding a friend of ours a college football team. In twenty parts. Twenty very weird parts. 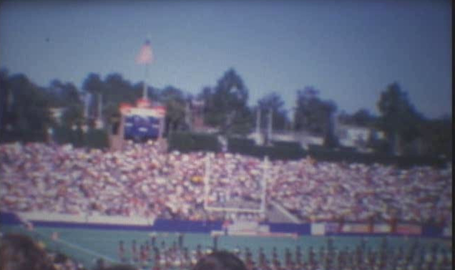 14: 50 You think this because you may have been born somewhere randomly, been spit into the waiting arms of certain parents in certain neighborhoods, and then bounced around cities, schools, and spots on the map. At one point, somewhere in that long fall down the Plinko board of life, you fell into a slot. The letters lit up, and you were sorted into a happy pile, and after that quiet, unconscious moment, you forgot the way there and assumed you had been there forever.

14:42 You have not been there forever, and It is not an accident at all. You love a team because they fulfill some need, or patch some hole in yourself left by shoddy construction and worse maintenance. They choose you. You later convince yourself of your own volition to choose them, rearranging facts and stories to the contrary. You had to love a team because your father loved them, or because your grandfather played for them, or because this one time you saw them play, and it just...took. It just took, and magic happened, with real sparkles and lightning and tiny helmeted fairies celebrating it.

14:37 That did happen. For instance, we have that moment. It was October 15th, 1994. We were in the stands at Florida Field, wearing a sick joke of a wool-blend band uniform. I was eighteen years old, blank, unformed, and as stupid as a human being could be without killing themselves by setting themselves on fire. The sky is overcast.

14:32 There are thirty-six seconds left on the clock in the fourth quarter of a 33-29 game between Florida and Auburn. The game is in Gainesville, Florida in October, and it still stinks of the heat and smell of rotting vegetation that envelops Alachua County at all times. (For six to seven months of the year it smells like living inside a tropical compost heap.)

14:03 Frank Sanders brings down the winning touchdown for Auburn. The rest of the stadiums shivers, slackens, and slumps as if it’s been collectively tased. A drummer a few rows down chucks his sticks into the bushes lining the endzone. The game ends after a futile flurry of offensive plays by Florida. Death in all directions. Silence. An overcast, clammy fear covering everything in sight.

13:52 You have to be brutally, scarily honest with yourself if you want a team. This honesty is not a short-term honesty, since you won’t even see it at first. If you watch Alabama football, you will first claim to love great defense, and the run game, and the passion of the outnumbered, maniac horde who hold the state’s only bragging rights over their feathered hair. (Alabama fans have a particular kind of hairstyle best described as the Coriolus Effect Made Manifest, or simply "Bama Bangs." They all have the same kind of everything, for the most part.) You like winning, and you like tough, physical football. Everyone who likes Alabama football says this.

13:30 Down the road, however, you’ll have to be more honest. You like these traits because they are manifestations of something unfed. You like Alabama football because you are from Alabama, and need something, anything to be proud of, or worse still you need it to connect you to a home you left long ago because you never ever felt comfortable there. You like it because you like winning, and are one of those shallow people who just like things that win, and don’t particularly care one way or the other if you have any actual connection to said thing. You like Alabama football for the same reason people not born in New York like the New York Yankees: because they are successful, and more than anything else, more than soul, person, place, or for the love of the thing itself, you value cardinal order. You might have a gigantic pachyderm of emotions sitting there in the corner of the room labeled "Father," and if he’s over there, then you’re over here watching Crimson Tide football for dark, obvious, and insoluble reasons.

13:14 Parenthetically: you might just like good defense and yelling "Rammer Jammer" at people. But I am skeptical.

13:02 You may even choose to root for a hopeless team. If you do this, if you enlist with the Baylors, the Kentuckys, the Indianas of the college football cosmos, you clearly crave sorrow, danger, or the mad rush of tears, thousands of minutes of accumulated tears, through your door. Merely reading these three names has formed a high pressure system in your living room, and a cold front in your kitchen. When they meet over your head as you read this in your chair or on your couch, the precipitation will be unending. You are a manic gambler, a masochist, a fool, or a patron of lost causes with time, love, concern, and pain tolerance to burn. You are not any saner or less sick at heart than the person who gloms onto surefire winners like Ohio State, Alabama, or USC. There is not a stray cat of a football program in the world you may not adopt. If it grows into a lion, you will be shocked, and have an entirely different set of problems.

12:51 No matter the choice, you will end up learning unpleasant things about yourself by choosing a team. You cannot prepare yourself for this, so do not even try. One day you will realize something horrible, something utterly unbearable and honest that football throws at you.

12:42 Frank Sanders had dropped that ball, and Auburn had lost that game, I might not be writing this. Winning is an ephemeral high, a cracked can of CO2 under the nose, a bump before a long night inevitably followed by another, and another, and so on down the sad road of addictive diminishing returns. You forget winning almost before they turn the scoreboard off; it vanishes with a blanket of a night's sleep, and dies quickly in any climate no matter how hard one might try to extend its shelf life.

12:37 Loss is immortal, and the edge of loss, risk, is the greatest narcotic ever made. Dostoyevsky was a gambling addict, a severe one, one so dedicated to losing money he sold novels of Russian length and still came up destitute and wandering the earth avoiding the bill collector. He once lost a bet on a horse race and ejaculated from the excitement. That may seem odd to you, and it makes perfect sense to me.

12: 28 It makes sense because when Frank Sanders brings down that ball, adrenaline dropkicked my stomach into the floor. An audible gasp ran out of my mouth, one I have only made since watching car accidents, horrifying moments from Breaking Bad, and perhaps the 2007 Florida Gators pass defense. Words failed; disbelief set in, since there had to be a few more seconds on the clock, some uninvoked rule the officials had missed, some appeal to be made to reality. That did not just happen. This is not happening.

12: 21 The feeling is still sort of there. An addict does not forget that, because the root wiring is the same in all cases. You want to be honest about why you watch things. We watch for the possibility of loss, of death, of watching a team get as close to oblivion as possible. The risk is simulated, but the payoff is real.

12:18 Ask any college football fan what their favorite team ever was. It is likely not the one that won every game by thirty points, but rather the team that finished every game spent, dazed, and shocked to have not only survived the game, but to have won by the most terrifying of margins. To love a team is to embrace masochism, to admit a taste for pain-by-proxy, and to willfully admit addiction. It is a twelve-step program stuck on step one forever: you are powerless, and your life will be way less manageable and tidy for it.

12:15 Loss is the base currency for everything in the emotional economy you are willingly embracing here. The payoffs come in other denominations, but the whole system is based on its existence.

12:14 For me, there is another uncomfortable realization: I am never home, even when I am at home. I am a Florida fan for a reason: in the absence of God or home, there was the state of Florida, and the things that eat other things in the dark of a boiling night, and the ordered version of that bloodsport, Florida football. A nation of nobody agreeing on one thing, and one thing only: violence against an other, preferably channeled through the hands and feet of our fleetest and most desperate citizens. Some part of me is violent, and craves violence for violence's sake. That part was Florida, and still is.

12:11 Like Florida, I’m where things that can’t go anywhere else end up, less a place than an interstate and the space between them, and less a person and more a sum of things consumed and digested, barely habitable, overheated, and better off at the edges. That is why I love Florida football, and why it chose me, and not the other way around. Misfit carnivores find their orbit. Football knew mine before I ever did.

12:00 So, you know. Choose carefully. You start by watching football. It ends up watching you.