Share All sharing options for: THE SEC SUMMER OLYMPIAD

We're still on the road somewhere in the American West. BOY YOU PEOPLE DON'T CARE ABOUT COLLEGE FOOTBALL AT ALL. We tested this by Gator chomping madly as we pushed past a 16 year old Jumpstreet employee, hit the trampoline hard like a Russian, and then landed joyously in the foam pit before earning a lifetime ban. They didn't even talk conference shit back at us, which is so very disappointing.

Anyway, let's SEC-ize the Olympics right quick while we're thinking about it and have a tiny amount of time between important, low-humidity social obligations in the Mountain State. 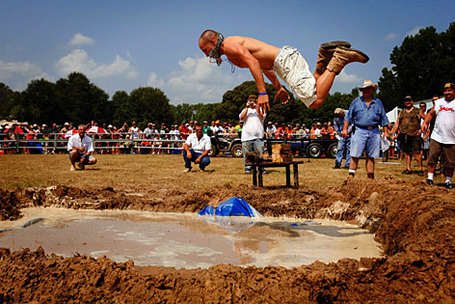 Basketball: Ask Kentucky, because they're the only ones who care.

Clean and Jerk: NOT AN EVENT DO NOT LISTEN TO REX GROSSMAN.

Diving: Competitors try to amaze the crowd with increasingly complex tricks. But Dad isn't paying attention. He never is.

Equestrian: WE'RE JUST GONNA RUN DONKEY RACES IN THE MIDDLE OF THE BRISTOL NIGHT RACE AND SEE WHO SURVIVES.

Fencing: Epee and saber replaced with buck knives and rakes. Points are scored when blood and scream.

Hammer throw: An actual hammer, thrown at Todd because he's a dick and INCOMING, TODD! YEAH? WHAT?

Handball: Formal dress event. You must dine and waltz with Vanderbilt O-Line Coach Herb Hand...and not fall in love!

Canoe/Kayak: Same whitewater course, but with flat of Keystone Light and unsecured infant in boat. Losing the beer is an instant DQ.

Golf: We only play 14 holes, and then claim superiority over other conferences that play a full 18. BUT THOSE HOLES ARE HARD, PAWWWLLLLL.

Racewalking: What we're calling the Egg Bowl this year.

Sailing: Done with catamarans only. First to flip the boat and lose the deposit wins. Must be done with yard-long Panama City beach margarita in hand.

Volleyball, Indoor: A pinata is hung carelessly inside a garage and an aluminum bat is produced. NOBODY CALLS THE COPS YOU GOT IT.