GIMME BACK MY HAT, YOU CURSED BIRD. Dabo doesn't even really look like he's looking so much at the gymnast as much as the raven that just stole his hat off his head. Dang you, you old crowthing! 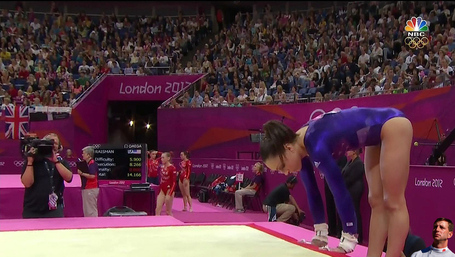 The Olympics theme will continue with a piece Messrs Bobby Big Wheel and Celebrity Hot Tub will have up around noon-thirty. We're on half-duty thanks to a working vacation in Colorado, where no one really cares about college football or us attempting to smuggle home a buffalo calf in an overhead compartment (hopefully.) (Shut up, it's for Holly.)

WELL, THIS REALLY ALL DEPENDS ON YOUR IDEA OF FUN. We happen to find Sabanball to be the equivalent of one long Dutch Oven, albeit an expertly assembled Dutch Oven. But if you get really bent over a scientific chart that includes such precise measurements as "EH" and "NFL," then you get exactly what you deserve. The Big East's cluster is...well, it explains so very much about everything.

THIS MAY ALSO DEPEND ON YOUR IDEA OF FUN. Les Miles' greatest challenge--winning a national title with less at quarterback than any other team in the history of the game--appears to be an ongoing project. The 2016 season where LSU wins a title with a 700 year old baobob tree under center will be his greatest achievement, second only to his innovative driving instruction techniques. (via)

WE ARE ONLY A FEW VARIATIONS AWAY FROM REALTREE CAMO. If Wyoming can make this work, Arkansas State is just a few months away from playing a game in hunting camo. It will--and must--happen. Michael Dyer, sadly, will miss all the fun as he eventually tumbles down to D-3 ball after getting kicked off seven different teams.

AIRBHG IS REAL. Iowa's demon-god refuses to relent in his pursuit of every last Iowa running back's career ever.

MARK RICHT HAS LOST CONTROL OF BRIONTE DUNN'S ONE-HITTER. The Ohio State running back was cited for paraphernalia and a seatbelt violation, and we're really way more upset about the seatbelt because no, dude, sure, you're going to brace yourself and catch the dashboard in event of an accident, and not turn into a flopping 200 pound projectile capable of killing me in an accident.