Share All sharing options for: FULMER CUPDATE: THE LEGACY OF ISAIAH CROWELL

The Fulmer Cupdate is brought to you by part-time weather balloon tether and Reggie Nelson-esque Boardmaster, Brian. Updates and scores follow. Purdue, you don't beat up your own bar. 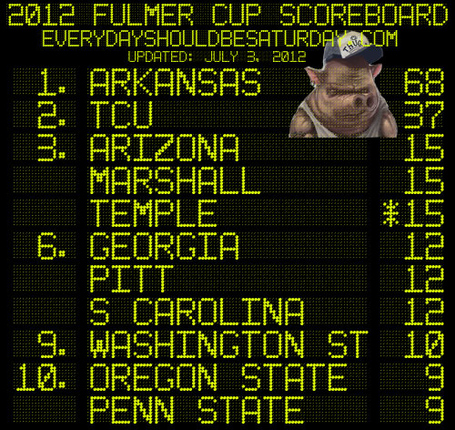 GEORGIA. The career of Isaiah Crowell is over at UGA, and his legacy is not insubstantial. As an innovator, he popularized the use of live animals in recruiting announcements. As a running back, he [ .] Finally, as a Fulmer Cup participant, he insisted on a novel method of making the board: getting tagged for felony weapons charges both in a school zone, and in the previously unawarded category of "possession of a weapon with the serial number clearly filed off."

That it's taken this long for someone in the SEC to be caught with a firearm with a mangled serial number is one of life's great oddities, but here we are. That the Athens PD undoubtedly staged the checkpoint in a school zone to rack up even greater fines and felonies is anything but a miracle, and that predictable degree of trouble-profiteering on their part is what makes the scoring so severe here.

Crowell's altered serial number and weapon possession in a school zone are both felonies, and are worth three points each. The misdemeanor concealed weapons charge is a point, and we award a single bonus point both for stupidity and in honor of his friends who must have eaten a huge amount of weed very quickly in order to avoid possession charges.

Eight points to UGA in the 2012 Fulmer Cup, and go dawgs. (You're still miles behind Arkansas.)

VIRGINIA TECH. How does one get a felony charge for stealing a bike, much less being an accessory to stealing a bike? Virginia's criminal code must be on some Hammurabbian shit, because for VT defensive end Dadi Nicolas to get a second-degree felony off this is batballs crazy. Still, we award points for charges filed, and these are very much charges filed. Three points for the Hokies are thus awarded, and don't ever do anything wrong in Virginia ever.

SHIRTLESS FIGHTING WILL GET YOU A BONUS POINT, TAMU. Take away the best little whorehouse in Texas, and this will happen time and time again. Shirtless fighting gets the Aggies three misdemeanor charges, and with the bonus points for a shirtless mugshot that's four SEC-ready points in the 2012 Fulmer Cup for Texas A&M.

PURDUE. If you can't get back in the bar, simply fall face-first through it. Patrick Bade of Purdue did just that, and we happily award one point to the single point for public intox because a.) we were told by Purdue grads that he was trashing "their bar," and b.) he wanted back in the bar so badly he was willing to go through glass to do it. Two points for Purdue, who reminds you Robert Marve STILL has eligibility.