GOOD LORD WE SUCK AT FONTS. This is not a congenital, widespread athletic department weakness. It's not. Plenty of other schools faced with the issue opt for tasteful, sometimes even excellent choices. Alabama goes with a roman kind of script for the same reason rednecks with money always get mansions with columns, Michigan chooses an acceptable varsity script because durrrr football, and Mississippi State goes with what might even be called clean, attractive lettering. These are all fine options consonant with the branding of the program. 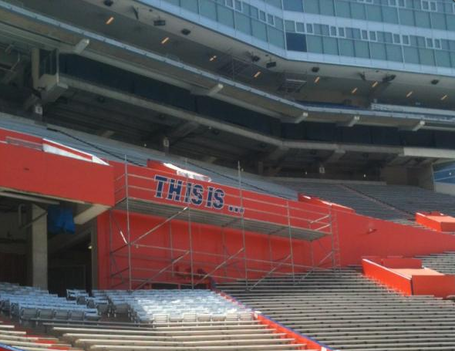 When it comes time to redo the "THIS IS...GATOR COUNTRY" sign on the side of the wall, the University of Florida reached straight in the folder of disastrous fonts and said: "Chillz? Nah. Comic Sans? TOO EDGY. Bodoni shut up you don't even exist what the hell is a Bodoni. Curlz? It's tempting, but why don't we just go with that 1991 horrible action movie font we used for the 2009 Sugar Bowl helmets? You know, the one that looks like it came from the personal stationery of former US secret operative Cobra Beefjet, who swore he'd never work for the man again but they took his cat or daughter and NOW THEY'RE GONNA PAY! That one."

If Fred Durst's penis had a memoir, it would be written in this font. This is totally perfect for Florida football. Please ignore all previous complaints.

ACTUAL HOOKER. All you have to do is pay a hooker. That's it. But at SMU they have a long history of mistreating hookers, so we hope she got something really, really good out of the theft. June Jones had no comment beyond the usual patter, but also noted that the player was clearly in the wrong because $50 is a crap price anyway, and that you really shouldn't take it from the street ever, and certainly not for anything less than $400 for a full car wash, and maybe he's already said too much.

ACTUAL NEWS. USC DE Devon Kennard is out for the season after tearing a pectoral, an injury that sounds so insanely painful except for all the other large muscles you can shear off your body at one go. He was expected to start for the Trojans, a team that cannot afford too many critical injuries, but [whistles and holds on to voodoo doll of Robert Woods and his receivers.]

ACTUAL DISCUSSION. Football Outsiders' personnel will be talking actual college football at noon at the mothership, including current FO contributor and internet O.G. Matt Hinton. The brilliant mumbling will be brilliant.

ACTUAL ANALYSIS OF BEER BOTTLE THROWING. Derek Dooley is disappointed in Tyler Bray, most particularly in his aim.

Later Dooley said: "Obviously, his accuracy isn’t where it needs to be. He missed the trash can."

Derek Dooley, in the school of SEC football coaches, is the child who spends a lot of time on the thinking mat considering his mouth and things it should not say. Les Miles is the one who stuffs kids in lockers, and Nick Saban is just in the back being boring, quiet, and quietly diagramming his torture dungeon down to the millimeter.

THAT'S CHAMPIONSHIP EATING. Six snickers in one sitting, you say? Mini or full-sized? The answer, of course, is "full size lol." The obvious conclusion from this: Florida State is back, and you should all expect them to win a national title and do amazing things all the time.

THIS IS JUST BEING LEFT HERE. An indefensible 27 page shitpile of rumor, innuendo, filth, outright sexism and racism, boring internet bickering, and unverified libel. We read the whole thing in one sitting, of course.

MORE INJUSTICE. The 1991 Tennessee/Louisville game, where Schnelly scored eleven because that's all a football team really should need for victory.

ETC: Oh, Black Lips, you please our 1982 Atlanta soul. Watch this and be healed of whatever is ailing you. Everything in this non-review is correct, but especially the part about not being able to like a book which is not in the least funny in any way, and also the part about Kafka reading his own books in public and laughing until he cried. COLLEGE FOOTBALL TIMECUBE.