Share All sharing options for: FULMER CUP: A RECORD APPROACHES 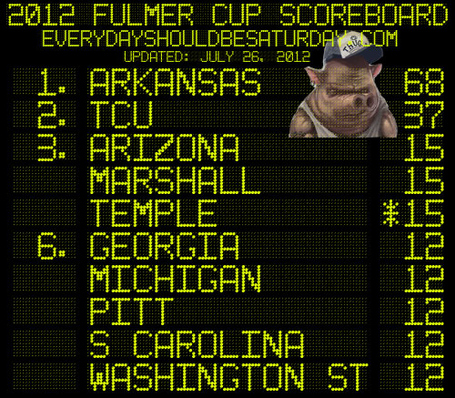 THE BIG BOARD OVERVIEW has Arkansas sitting on a formidable lead, but if this year has proven anything it is that no lead is insurmountable. If Joe Tessitore suddenly appears on the armrest of your couch, be warned: a late lead change of drastic nature is about to take place, and your first home invasion and kidnapping at the hands of bored football players is about to occur. 68 points is a very large number, but all you need is one overzealous prosecutor and a crime involving three or four players, and suddenly we're all playing ArenaBall here.
We hope that doesn't happen, but it certainly could. This season in particular seems ripe for it: 429 points have been awarded through July 26th, just one point shy of the record 430 awarded in 2011. Theorize as you like, but we believe this to be a result less dependent on the decline of Western Civilization, the drugs and the video games and the dubstep and the internet, and more one of reportage and random variation. Nothing escapes the internet, even when you would really like it to sometimes.
MICHIGAN receives the largest bump this week from two incidents. First, the previously covered DUI of Fitzgerald Toussaint, whose tipsy motoring was unappreciated by law enforcement authorities in Michigan. This is a standard two point DUI without extraordinary circumstance.
The same cannot be said for second-degree home invasion, a truly legendary charge picked up by defensive end Frank Clark in taking a laptop from a dorm room earlier this month. Why the prosecution opted for the home invasion charge instead of a theft we don not know, but the charges earn the same points as robbery: three points for a felony, and one bonus point for doubling Michigan's appearances up in a week with the eye-popping "home invasion" charge.
Michigan thus earns a total of six more points in the 2012 Fulmer Cup, putting them securely on the Big Board's lower rungs.
PURDUE does not exist, but its players do, and sometimes their fists allegedly go into ladies' faces in bars. Sean Collins was dismissed from the Boilermakers, but the points occurred while he was on the team, so the three misdemeanors at one point plus a bonus for hitting girls equals four points for the Boilermakers, who will now vanish back into obscurity or West Lafayette, Indiana. (Redundancies.)
EAST CAROLINA gets your basic possession charges for the weed arrest of nose tackle Terry Williams, but the intent to distribute for an additional point takes things to two points for the Pirates. We still maintain that drug charges surrounding distribution should be done by weight, since the amount of narcotics required to bring a nose tackle down to Chillsylvania is absolutely ridiculous. No, we do NOT know that by hanging out with former Florida football players okay yes now shut up we do.
WAZZU football players just want to drink beer in public and occasionally liberate expensive headphones from Wal-Mart, and for that pair of misdemeanors two points shall be awarded in the Fulmer Cup to their august institution. Enjoy whatever horrible early morning quiz show/plyo-torture show Mike Leach creates for you, gentlemen.
OLE MISS is now a place where a promising tight end can't be stink drunk and peeing willy-nilly in downtown Oxford. Jamal Moseley thought this was America, but instead receives two points for something locals probably applauded Faulkner and Deuce McAllister for doing. (Together! Like dinosaurs and cavemen, the two did co-exist. Deuce wrote half of Sanctuary! The non-awful part! Don't tell anyone, ever!)
IOWA running backs receiving fifth-degree theft charges is a bad thing, but the lack of ACL injury in the course of arrest is a positive Hawkeyes fans can take away from Marcus Binns' arrest for changing the price tags on shirts in Iowa City. You think a Georgia football player can't do this, but also get charged simultaneously for riding a scooter into a mall? Oh, you just made the wrong dare, Iowa. JUST WATCH THEM DO IT.
One point for the Hawkeyes is awarded, and do not ever let Iowa running backs out in direct sunlight or anywhere where their legs can bend or move in anyway whatsoever before football season.